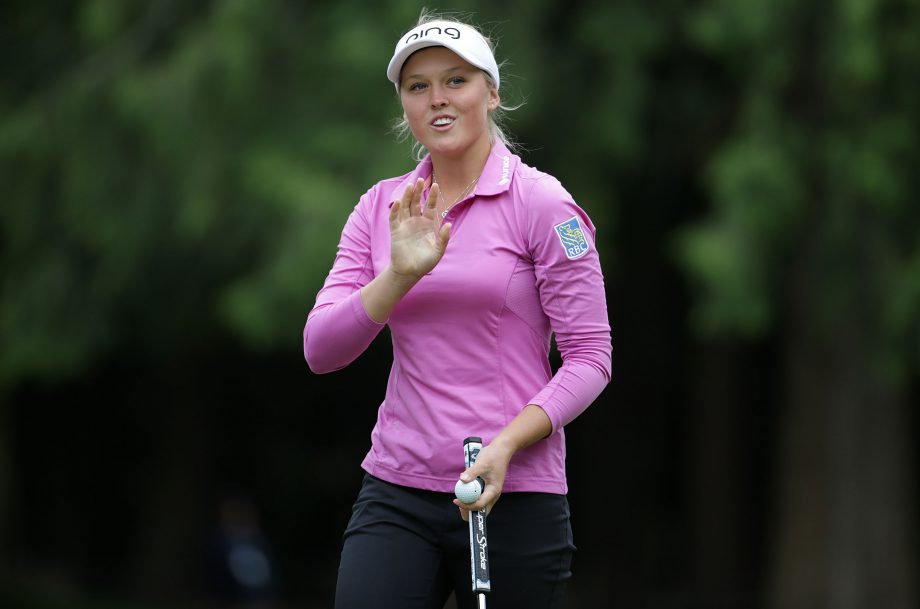 Through rain squalls of rain and wind gusts, Brooke Henderson and Mirim Lee maintained their composure and patience even as the weather deteriorated.

Henderson and Lee withstood the wild conditions Friday to share the lead at 2 under halfway through the KMPG Women’s PGA Championship, the second major of the year on the LPGA Tour.

Playing in the afternoon, Henderson and Lee fought through a mix of heavy rain, wind and a significant drop in the temperature at Sahalee Country Club. After six straight pars, Henderson birdied the par-3 17th, but the 18-year-old Canadian bogeyed the 18th for a 2-over 73 that dropped her back into a tie with Lee.

“Definitely growing up, springtime, fall-time weather was very similar to this,” said Henderson, ranked fourth in the world. “Definitely it gives me a little bit of advantage. But I like to think I’m a good player in all conditions. Maybe it runs in my favor a little bit.”

Lee started on the back nine and surged when she got to the front, making three birdies before dropping a shot late and finishing with a 69. Lee had two top-10 finishes this year, but missed the cut at the ANA Inspiration, the first major.

And sitting just one shot behind the leaders was top-ranked Lydia Ko, who scrambled to a 70 in her bid to win three straight majors. Ko was in a group with Gerina Piller (69) and Brittany Lincicome (70), with only five players under par after two rounds.

“It was really tough out there,” Ko said. “I don’t know how many putts I had on the back nine, but the putter definitely saved me.”

The real winner the first two days was Sahalee. Cut between the towering pine and cedar trees the course was unrelenting in its difficulty. Only two holes played under par on Friday – the par-4 third and the par-5 11th. For the first two days there have been only 22 rounds under par and seven in the 60s. The course is playing nearly 4 1/2 shots over par.

“It has some teeth,” Piller said. “I think we had every element out here.”

Piller birdied two of her final three holes to become the first player to finish 36 holes under par, including a long birdie on the 18th. It was just the seventh birdie on the long, uphill par 4.

“I’m putting great, so I know if I can just get around the hole I have a chance to make par or birdie or save some shots there,” Piller said.

Lexi Thompson tried to get back into contention with three birdies in four holes to finish the front nine, but gave it all away with three straight bogeys to start the back side. She finished at 7 over along with Stacy Lewis (76), both barely making the cut and staying around for the weekend.

Heading home is three-time defending champion Inbee Park. A day after wrapping up an LPGA Hall of Fame spot, the South Korean star shot an 79 on Friday to drop to 9 over.

“Today’s round was going all right on the front nine. I felt like I was holding on pretty good. On the back nine I just couldn’t get a rhythm with the swing and I missed a lot of shots to the right, what I have been doing in the last month or so,” Park said.

Park has been dealing with inflammation in the tendons and ligaments around her left thumb. She shot a 72 on Thursday, the round she needed to complete the 10-year requirement for the LPGA Hall of Fame. At 27, she became the youngest player to accomplish the feat.

Park said she will reconsider taking an extended break to let the thumb heal, one that could bring the Olympics into question.

“I think now having tried three, four times with the injury, playing with the injury I kind of have to rethink and regroup,” Park said. “I might need some time to really get better and be back with the confidence. I’m just going to have to sit down with my team and discuss it.”

Thailand’s Ariya Jutanugarn, the winner of her last three tournaments, was 3 over after a 75. Michelle Wie dropped out, shooting 78-80.

Hamilton’s Alena Sharp shot 1-over 72 on the day and holds a share of 28th. Sherbrooke, Que., product Maude-Aimée Leblanc is T56. Samantha Richdale of Kelowna, B.C., is T136.