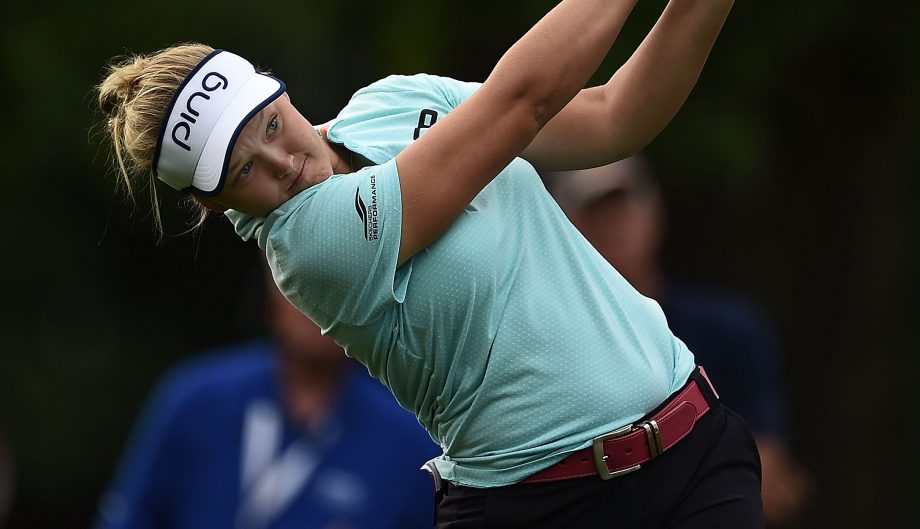 Canadian Brooke Henderson shot an 8-under 63 on Thursday to top the star-packed leaderboard in the Meijer LPGA Classic.

The 19-year-old from Smiths Falls, Ont., eagled the par-5 eighth hole and had six birdies at Blythefield in her lowest round of the season. She won the major KPMG Women’s PGA Championship last year and has three tour victories.

“It’s beautiful here,” Henderson said. “I feel like this course suits my game really well. There’s a couple tee shots where you need to hit it really straight, which I think is kind of my advantage or my strength. And once the putts start dropping, then really good things can happen.”

Fellow major champions Lexi Thompson, Stacy Lewis and Shanshan Feng were a stroke back along with Calgary’s Jennifer Ha, Giulia Molinaro and Holly Clyburn. Lydia Ko, at No. 2 in the world after an 85-week run at the top, returned from a three-week layoff to top the group at 65.

“I had the last three weeks off to get prepared with this big stretch coming up,” Ko said. “I took some time to relax, did some university work. So it was, I think, a really good break.”

New No. 1 Ariya Jutanugarn opened with a 69. She won the Manulife LPGA Classic on Sunday in Canada in a playoff with Thompson and In Gee Chun.

Henderson tied for 11th last week in her native Ontario, her seventh top-15 finish of the year.

“I felt like today was going to be a really good day,” Henderson said. “Everything was just kind of going my way. I was hitting the ball really well and some putts were dropping, which is kind of a change from the last few weeks. It’s really exciting and I’m looking forward to the next three days.”

“I felt great from the start and felt like today was going to be a very good day” – @BrookeHenderson after her opening 63 @MeijerLPGA pic.twitter.com/B3lReeH9GQ

Thompson had eight birdies in a 10-hole stretch in the middle of the round.

“I just love the layout,” Thompson said. “It’s always in great shape for us, first of all. Hit a lot of drivers, which is nice. That’s my strength, so it comes into factor on this golf course a lot.”

“I played really solid,” Lewis said. “I was kind of surprised looking at the scoreboard. I expected somebody else’s name to pop up that was still playing. It was pretty hard out there and the greens got firm. The wind was tricky back in the trees. I played great. It felt like boring golf but it was good, boring golf.”

She was surprised by the low scores.

“I didn’t quite see all those numbers, but I knew the golf course had to be softer,” Lewis said. “I tried to stay patient. The ball was going so far. That was my biggest challenge. I had some iron shots rocket on me, just because of the heat. I tried to dial it back and was able to make the last two.”

Feng is trying to complete a Michigan sweep after winning the LPGA Volvik Championship three weeks ago in Ann Arbor. The Chinese star pointed to putting on Blythefield’s undulating greens.

“Some the greens are pretty hilly, so you have to get the right read and also the right speed at the same time,” Feng said.

Michelle Wie opened with a 68, and defending champion Sei Young Kim had a 70.