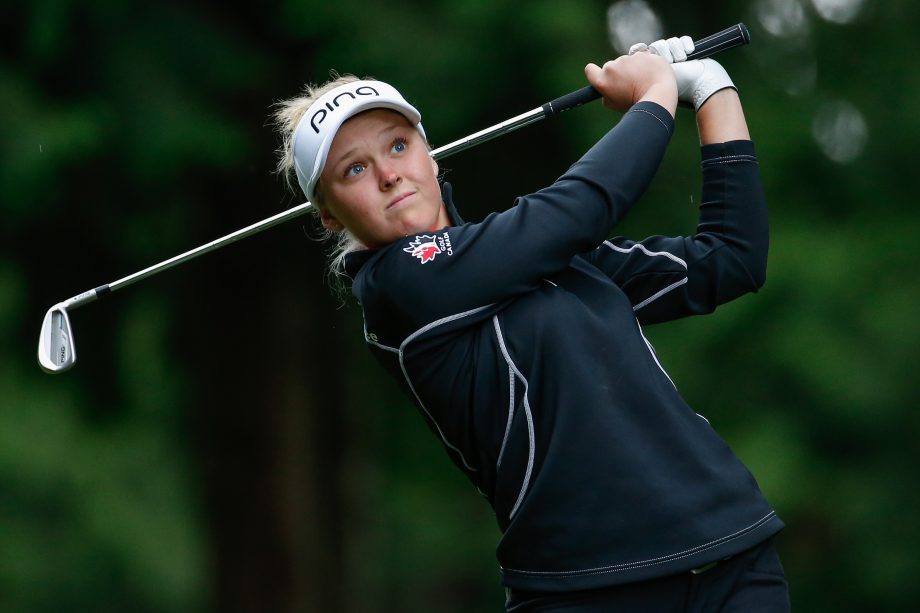 SAMMAMISH, Wash. – When Lydia Ko won the last two major championships, she was the one lurking behind.

On Sunday at Sahalee, the top-ranked Ko will take a one-stroke lead into the final round of the KPMG Women’s PGA Championship.

Ko shot a 1-under 70 on Saturday to reach 2-under 211. She won the Evian Championship in September in France for her first major title and took the ANA Inspiration in April in California, giving her a chance to become the fifth player in tour history to win three straight majors.

“It’s really cool to, obviously, have my name in those records among those amazing players. And I think that’s the really cool thing about it,” Ko said. “But when I’m out there I’m not thinking so much about records and what could happen.”

Ko used her deft short-game to save shots on the 16th and 17th holes, but couldn’t avoid dropping a stroke at the last when her third shot went to the back of the green and she missed a 15-foot par putt.

Brittany Lincicome and Gerina Piller were tied for second. They each shot 71, with Lincicome also bogeying the 18th. Second round co-leaders Brooke Henderson (Smiths Falls, Ont.) and Mirim Lee each shot 73 to drop into the group at even par. Only three players were under par even as Sahalee played easier following overnight rain.

Ariya Jutanugarn, the winner of her last three tournaments, was in the group at even par. Jutanugarn got back into contention with a 68. Amy Yang also was even after the lowest round of the week, a 66. Yang went out in 32 and was 6 under for her round after a birdie at No. 15, before dropping a shot on the 16th.

Anna Nordqvist, the winner last week in New Jersey, and Chella Choi completed the group at even par. They each shot 69.

Ko missed a chance to create some separation late in her round. She moved to 3 under with an 18-foot birdie putt on the 15th, then showed off her delicate touch around – and on – the green coming in. Ko put herself in poor position off the tee on the 16th, but a flop shot out of the rough to 4 feet allowed her to save par. On the par-3 17th, Ko’s tee shot found the green but in a position where a chip shot was the only way to get to the hole because of the fringe. The chip from green-to-green left her a 3-foot tap in.

But her second shot on the 18th caught a large tree fronting the left of the green and was unable to save par.

Lincicome, a two-time major champion, also dropped a shot at the final hole because of a three-putt. Along with Ko, Lincicome is the only other player in the field not to post a round over par in the tournament

“It’s easier to come from behind than be the leader,” Lincicome said. “I feel like I’m in great shape.”

Piller is hoping she can finally make a breakthrough after three years of progressively getting closer to her first career victory. She has finished in the top 10 six times this year, including a second-place finish at home in Texas when she was overtaken on the final day.

She has risen to No. 16 in the world rankings and moving up one more spot before July 11 would earn her an automatic spot in the Olympics.

“I do feel like winning is definitely close,” Piller said. “I definitely feel that my game is good enough and it’s just a matter of time when the pieces fit and it just comes together.”

Maude-Aimée Leblanc of Sherbrooke, Que., carded 71 for a share of 37th, and Hamilton’s Alena Sharp is T47. Kelowna, B.C., native Samantha Richdale will not move onto the final round.