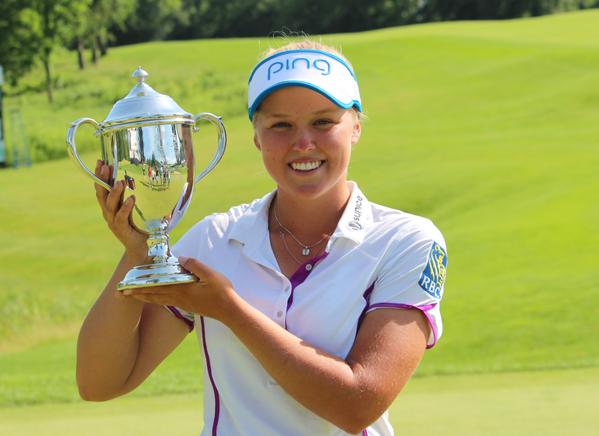 SOUTH BEND, Ind. — Brooke Henderson of Smiths Falls, Ont. carded a 3-under 69 to win the 2015 Four Winds Invitational by three shots at 10-under 206. Henderson becomes the third youngest winner in the history of the Symetra Tour.

“It’s amazing to win and I’m so thankful that I got the sponsors exemption this week so I’d be able to play with my older sister,” said 17-year-old Henderson. “I’m very grateful for the win here and I think it will be a big confidence booster moving forward.”

“These are great players out here (on the Symetra Tour) and this win is huge for me,” Henderson continued. “I have big goals and this is definitely a stepping stone towards them.”

Henderson played the front nine in 1-under to move to 8-under for the tournament and made the turn in a share of the lead with Dottie Ardina. Then, Ardina made birdie on the tenth hole to take the lead at 9-under. Both Ardina and Henderson made birdie on the 11th hole and Ardina held a one shot lead with seven holes to play.

The momentum shifted in Henderson’s favor on the 12th hole when she made birdie and Ardina made bogey. Henderson also birdied the 13th hole to move to 11-under. She would cruise to victory as Ardina made four bogeys over five holes between the 12th and 16th holes.

“I was 1-under on the front nine and I knew I was near the lead, but I was kicking myself because I knew I needed to get it going,” said Henderson. “Holes 11 and 12 were huge turning points where Dottie and I kind of switched positions and then I was able to keep it from there.”

Henderson has been very busy and will continue to be, but she is fine with that.

“I’ve been busy, but I wouldn’t change it for the world, it has been a lot of fun,” said Henderson. “People often ask me how busy it is and why I don’t take a week off, but I love being out here and I think every week I am learning a bit more about myself and my game and I think it is helping me be better.”

Brooke’s older sister, Brittany, a Symetra Tour member, followed her from hole 16th until the end.

“Brittany has been a huge role model for me and this week it has been awesome to be able to play with her,” said Henderson. “I’ve always followed in her footsteps and I was so excited to see her on 16 and have her follow me in. She is one of my best friends, too.”

Second-round leader Dottie Ardina of the Philippines was second. She birdied the final hole for a 74.

After the victory, Henderson also took to Twitter to announce some great news. The Team Canada member – having previously been denied LPGA membership due to an age restriction – is now a member of the Symetra Tour.

So excited about my @Road2LPGA win!!! And so thankful to @LPGACommish to accept my petition to become a member of the #SymetraTour

“Based on her win today at the Four Winds Invitational, Henderson will now be seeded into Category C on the 2015 Symetra Tour Priority List for the remainder of the season,” said Heather Daly-Donofrio, the LPGA’s Chief Tour Operations Officer.

As a Symetra Tour Member, she will be eligible to earn official money for the purposes of the Symetra Tour Money List and the Volvik Race for the Card.

Per Symetra Tour regulations, any money previously earned by Henderson as a non-member will remain unofficial for the purposes of the Symetra Tour Money List. Henderson plans to compete this week at the Island Resort Championship in Harris, Michigan.