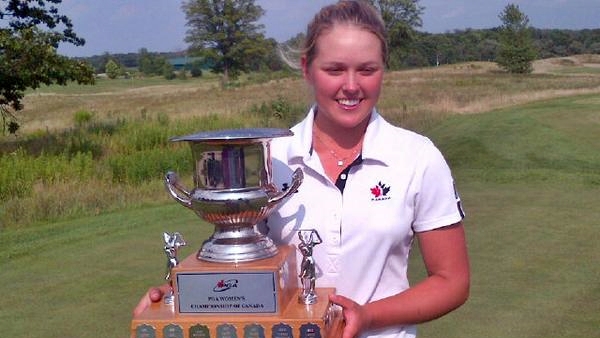 The 16-year-old posted a two-day total of 13-under par, setting a new championship scoring record and adding her name to a list of champions that includes Lorie Kane, Cathy Sherk, Gail Graham, Nancy Harvey, Jessica Shepley and Alena Sharp.

“Coming into this week I saw all those great names on the trophy and I wanted to have my name alongside them,” the Team Canada member said. “It’s a great feeling to know I am able to compete against the best players in Canada and someday the best players in the world.”

The Smith Falls, Ont., native’s 36-holes at FireRock Golf Club featured 14 birdies and an eagle, with a stretch of five birdies in a row on the back-nine Thursday afternoon.

“I struggled a little bit on the front nine – I was hitting some great shots, but the putts just weren’t dropping,” Henderson admitted about her front nine score of 2-under-par 34. “But that all changed starting on No. 10 with a birdie. I think I had five in a row coming down the stretch and it was awesome.”

With the win, Henderson, who is currently ranked No. 2 in the World Amateur Golf Rankings, pads her already impressive tournament stats in 2014. She was the low amateur (T10) at the U.S. Women’s Open, finished tied for 26th at the Kraft Nabisco Championship, and tied for 45th at the Manulife Financial LPGA Classic. She’s also has wins this year at the Canadian Women’s Tour event in Niagara Falls, the Porter Cup, the Ontario Women’s Amateur and the Scott Robertson.

The PGA Women’s Championship of Canada counted as the third and final stop on the Canadian Women’s Tour, with points awarded toward the Jocelyne Bourassa Player of the Year at the conclusion of the championship.

Similar to past years, the champion of each Canadian Women’s Tour stop and the PGA Women’s Championship of Canada will receive an exemption into the 2014 Canadian Pacific Women’s Open to be held Aug. 18-24, 2014 at London Hunt & Country Club in London, Ont. As well, two (2) additional exemptions were awarded to the top competitors, not otherwise exempt into the Canadian Pacific Women’s Open from the 2014 Canadian Women’s Tour Order of Merit.

As well, the top five (previously the top 3) players on the Canadian Women’s Tour season-ending Order of Merit will be awarded direct entry into LPGA Stage-2 Qualifying.

Henderson captured the Jocelyne Bourassa Player of the Year award, with Richdale and Feng earning exemptions into the CP Women’s Open.