Brooks Koepka caps a record week with US Open title 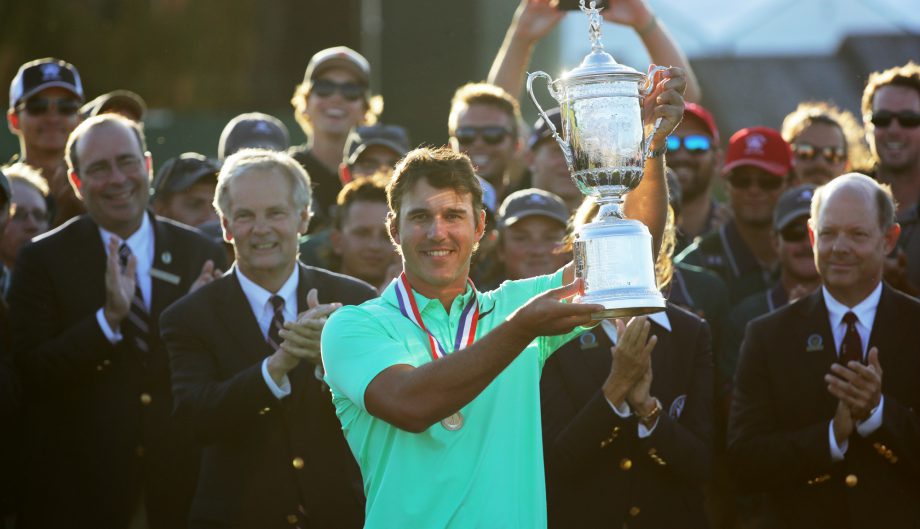 Brooks Koepka received a short piece of advice from a valuable source on the eve of the final round at the U.S. Open.

Defending champion Dustin Johnson was doing most of the talking.

“It was a long phone call for us – it was like two minutes,” Koepka said. “But he just said a few things, and just stay patient. And I’ll win if I stay patient and just keep doing what I’m doing.”

What he did looked awfully familiar Sunday at Erin Hills, minus any mess involving the rules.

With athleticism and power, and four straight putts over the back nine that allowed him to pull away, Koepka capped off his hardscrabble journey around the world and found stardom at home as the U.S. Open champion.

A two-minute recap of @BKoepka's final round of the 117th #USOpen. pic.twitter.com/zvMpeOnqQ9

He closed with a 5-under 67, only realizing after his par on the final hole that a birdie would have set yet another U.S. Open record in a week filled with them.

Koepka finished at 16-under 272, matching the lowest score to par first set by Rory McIlroy six years ago at Congressional.

Tied for the lead with six holes to play, Koepka holed an 8-foot par putt on the 13th hole that gave him confidence with his stroke and momentum to pour in birdies on the next three holes to turn the final hour into a celebration of another young star in golf.

The 27-year-old Koepka wound up winning by four shots over Brian Harman, who was done in by back-to-back bogeys right when Koepka was making his run, and Hideki Matsuyama, who closed with a 66.

“That’s probably the most emotion I’ve ever shown coming down the stretch,” Koepka said. “It feels amazing to get my name on this trophy with so many other great names. It’s truly an honour.”

Thoughts from the champion. pic.twitter.com/LkY0Fh85uC

Emotion? The most he displayed was a light fist pump, his hand clenched a little tighter with each birdie, and a double fist pump on the 18th when he tapped in for par.

It’s not much different from Johnson.

They are close friends on the golf course and in the gym, and they play a similar game of power off the tee, a clean strike with the iron and a knack for looking calm even as the pressure is ramping up.

And now their names are on the U.S. Open trophy, one after the other.

It capped quite a journey for the Floridian. Without a card on any tour when Koepka got out of Florida State, he filled his passport on the Challenge Tour with stamps from Kazakhstan to Kenya, Scotland and Spain, India and the Madeira Island.

One night in Scotland, he called his agent and wanted to come home, even though he was leading the tournament. He had been on the road for so long, in so many different countries, and was feeling lonely.

He won the next day to graduate to the European Tour. The next year, he earned a spot in the U.S. Open through a qualifier in England, and his tie for fourth at Pinehurst No. 2 helped him earn a card on the PGA Tour.

Koepka took it from there – a victory in Turkey against a strong field, his first PGA Tour victory in the Phoenix Open, his first Ryder Cup and now a major championship.

“To go over there, I think it helped me grow up a little bit and really figure out that, hey, play golf, get it done, and then you can really take this somewhere,” he said.

Koepka became the seventh straight first-time winner of a major championship, and it was the first time since 1998-2000 that Americans won their national championship three straight years.

Tommy Fleetwood, who played alongside Koepka and closed with a 72 to finish fourth, played the Challenge Tour a year before Koepka arrived.

“It gives you a good grounding,” Fleetwood said. “Obviously, Brooks dealt with it amazingly. He came and kicked everyone’s (behind) over there, didn’t he? But he’s proven for a long time how good he is. Now he’s done it in a major.”

It was only fitting that Koepka left Erin Hills with yet another record matched or broken.

McIlroy finished at 16-under 268 when he won on rain-softened Congressional in the 2011 U.S. Open. But the low scoring went much deeper than that.

Only six players had ever reached double digits under par in the previous 116 times at the U.S. Open. McIlroy and Tiger Woods (12 under at Pebble Beach in 2000) had been the only players to finish there.

This week alone, nine players reached at least 10 under and seven finished there.

Xander Schauffele, a rookie on the PGA Tour playing in his first U.S. Open, birdied his last hole for a 69 to tie for fifth at 10-under 268 along with Bill Haas (69) and Rickie Fowler (72), who was poised at yet another major to win only to fall back.

Fowler started one shot out of the lead at the Masters this year and shot 76. He was only two behind when he made the turn, but bogeys on the 12th and 15th holes – and no birdies until No. 18 – ended his hopes.

Justin Thomas, coming off a 9-under 63 that matched the major championship scoring record and was the first 9-under round at a U.S. Open, went out in 39 and closed with a 75 to tie for ninth.