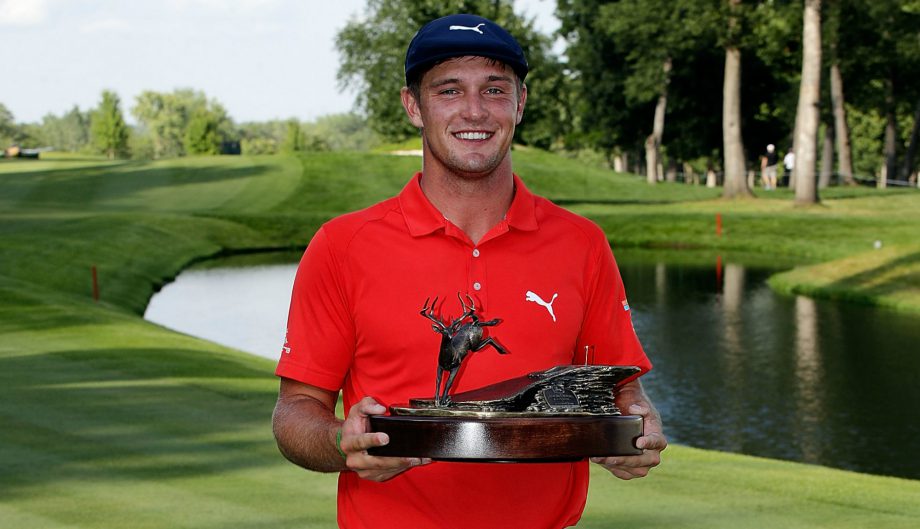 Third-round leader Patrick Rodgers knew that it would take a ton of birdies Sunday to win the John Deere Classic.

DeChambeau overcame a four-stroke deficit to beat Rodgers by a stroke for his first PGA Tour title _ and a spot next week in the British Open.

The 23-year-old DeChambeau birdied four of the final six holes at TPC Deere Run for a 6-under 65 and an 18-under 266 total. In 2015, the unconventional former SMU star became the fifth player to win the NCAA individual title and U.S. Amateur in the same year.

The win punctuated a comeback of sorts for DeChambeau, who capped a string of eight consecutive missed cuts last month in the U.S. Open – where he was 6 over for two rounds.

“I was able to right the ship about three or four weeks ago, and it’s been steady Eddie ever since,” DeChambeau said. “It is vindication.”

DeChambeau made a 14-foot birdie putt on No. 18 to pull even with Rodgers. Rodgers then had a par putt on No. 17 lip out, and sent his tee shot on 18 into the rough.

“He’s a great competitor, and I was kind of shocked he bogeyed 17,” DeChambeau said about Rodgers. “I thought I was going to be in a playoff.”

DeChambeau played the front nine in even par, then birdied six of the final nine holes to surge to the top of the leaderboard.

Rodgers, on the other hand, had four bogeys _ and his approach on No. 18 sailed past the green. Rodgers nearly chipped in from 50 feet to force a playoff, missing the cup by a foot.

DeChambeau became the 10th first-time winner on the PGA Tour this season.

“Our tendency when you have the lead is to kind of hold on and play safe and guard against making mistakes,” said Rodgers, who remained winless on the PGA Tour. “But I had guys coming at me with some really low rounds. Obviously, Bryson shot a great one.”

Bryan, who won the RBC Heritage in April for his first career victory, shot a 30 on the back nine. Lamb was 13 under for the final two rounds but was done in by pedestrian efforts in the first two rounds.

Stricker, who won at TPC Deere Run from 2009-11, grabbed a share of the lead before Rodgers teed off Sunday.

The 50-year-old Stricker went 8-under par through 14 holes to jump all the way up from 34th place. But his only bogey came on the 18th hole, when his par putt grazed the cup.

“Realistically, if I could have made a couple more birdies there and could have got it to 18-under, who knows? Just couldn’t get it in there,” Stricker said.

Johnson, who won the tournament in 2012 and has finished in the top three six times in his last eight appearances, challenged the leaders yet again before falling back. Johnson picked up bogeys on a pair of par 4s on the back nine, and he missed a 4-foot birdie putt on 14.

“My goal was to birdie every hole and give myself a chance on every hole. Early on it looked like my game plan was being executed,” Johnson said.

Bubba Watson shot a 68 to finish at 9 under.