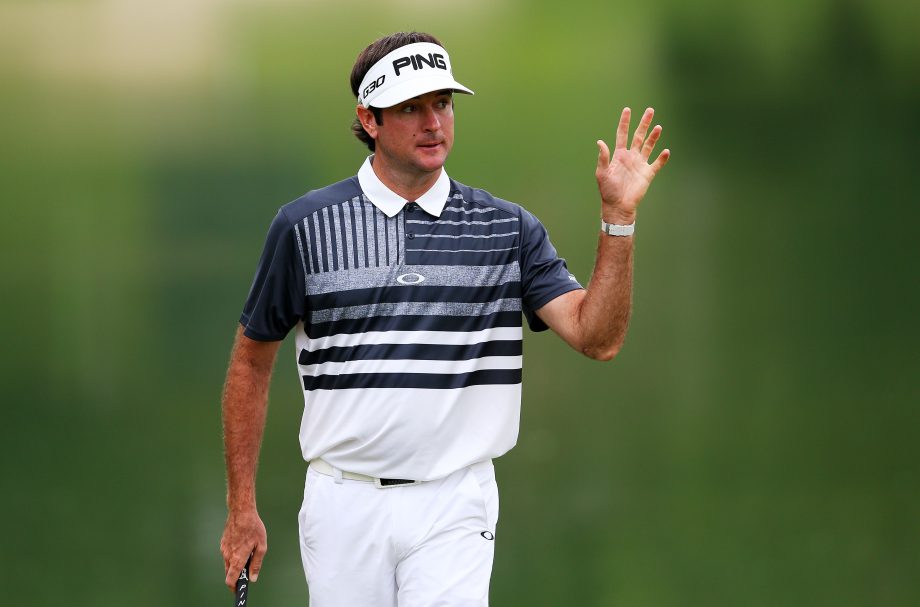 CROMWELL, Conn. – Bubba Watson hit to inches on the final hole for the last his nine birdies in an 8-under 62 on Thursday in the first round of the Travelers Championship.

Watson has a two-stroke lead in the event he won in 2010 for his first PGA Tour title. He has finished in the top 20 five times in eight previous starts at TPC River Highlands.

“It’s special,” Watson said about the tournament. “It was my first win and it’s the same time that I announced to the world that my dad was passing with cancer. So, special in different ways.”

New England native Keegan Bradley was tied for second with Jason Gore, Seung-Yul Noh, Brian Stuard and Harris English, who shot a 30 on the back nine. Eight players shot 65, and 12 more opened at 66. Ninety-three players were under par.

“Coming off a U.S. Open, this golf course seems like it’s gettable, and we all feel that way,” Watson said. “So the guys that played in the U.S. Open maybe feel better about their game when they get here.”

Watson, playing late in the day, had four birdies on his final five holes. The two-time Masters champion just missed an eagle on the par-4 18th hole, hitting a 139-yard second shot that bounced into the flagstick and rolled 4 inches past the cup.

His only glitch during that stretch was bogey on the par-3 16th, where he overshot the green, and chipped his second shot past the hole and into the fringe.

“I just kept grinding it out,” he said.” “Whatever shot was called for, I tried to hit it and somehow today, I hit it good.”

Bradley, put up an early 64, shooting a 31 on his front nine. The 29-year-old, who was born in Vermont, is playing his fifth Travelers Championship, which he considers a home tournament. His best finish has been 18th.

“I put a lot of pressure on myself in every tournament, but this one especially just because I’ve got a lot of people here. I know a lot of the fans are rooting for me. I can feel it.”

Ernie Els is making his first appearance in Connecticut since 2002 and was among those at 66. He said he normally heads to Europe after the U.S. Open to prepare for the British Open, but decided to try to pick up a few more FedEx points this year.

Argentina’s Andres Romero won a Rolex watch during his round of 69 when he aced the 177-yard par-3 16th hole. Romero said he grabbed his 7-iron and decided to go for the pin after his caddie translated a sign about the hole-in-one prize next to the tee box.

“I got the shot off and when it headed toward the hole and disappeared, I couldn’t believe it,” he said through a translator.

It was the third hole-in-one of the Romero’s career, and he said now owns seven Rolex’s.

Martin Laird may have had the shot of the round when he holed out from 140 yards for an eagle on the par-4 17th hole, watching as ball cleared the water and the pin before rolling back into the cup.

As many as nine spots for the British Open are available this week.

The leading five players, not already exempt, from the top 20 in the FedEx Cup will be part of the field at St. Andrews next month.

In addition, the leading four players who finish in the top 12 at TPC River Highlands also will get spots. The Travelers is the first of three PGA Tour events where top finishers can get into St. Andrews. There are four spots available at The Greenbrier Classic, and one at the John Deere Classic.