Bubba Watson wins at Riviera for the 3rd time 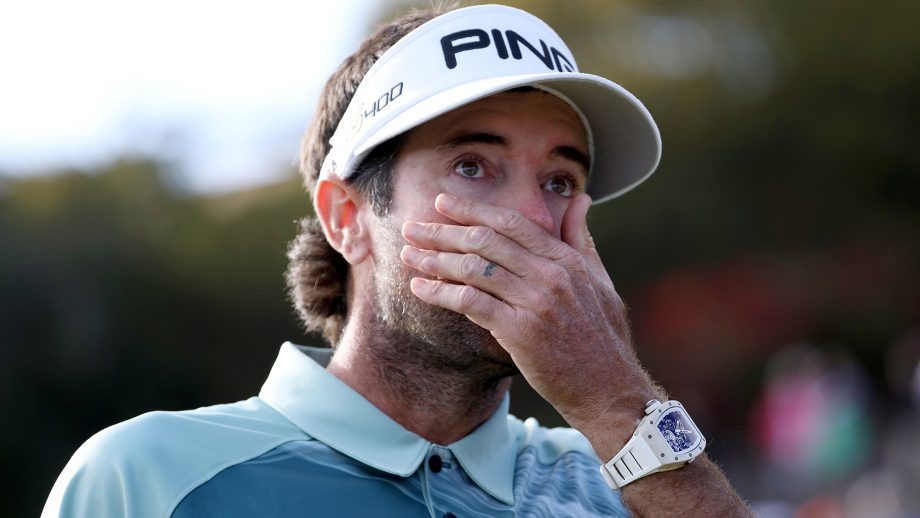 Watson seized control Sunday with two par putts as everyone around him was dropping shots, then pulling ahead by holing a bunker shot on the par-3 14th hole. He closed with a 2-under 69 for a two-shot victory in the Genesis Open over Kevin Na and Tony Finau, and more tears on the 18th green.

It was his first victory since he won at Riviera two years ago, rising to No. 4 in the world.

Watson showed up this year at No. 117, coming off a year filled with so many doubts that he says he discussed retirement with his wife on a dozen occasions. If anything, the only talk of retirement should be whether settle down off Sunset Boulevard.

He joined Ben Hogan and Lloyd Mangrum as three-time winners at Riviera. Hogan’s victories include a U.S. Open.

Na hit a wedge close to perfection from the worst angle on the reachable par-4 10th hole for a birdie and two-putted for birdie on the 11th to briefly take the lead. He fell back with consecutive bogeys from the trees and shot 69. Finau lurked all day. His last chance was an eagle putt on the 17th that stopped inches short of the hole.

Patrick Cantlay had a one-shot lead going to the back nine until he ran into tree trouble on the 12th and 13th holes. The UCLA alum could do no better than pars the rest of the way for a 71 to tie for fourth with Scott Stallings (68).

Phil Mickelson also was in the hunt. He was within one shot of the lead when he hit a 4-iron from a deep bunker on the 15th hole to just right of the green. But he went after birdie and watched the ball roll 20 feet down the hill, leading to bogey. Mickelson shot 68 and tied for sixth.

Coming off good weeks at Phoenix and Pebble Beach, Mickelson has three straight top 10s for the first time since 2009.

Adam Hadwin was the top Canadian. The Abbotsford, B.C., native shot his second straight 66 to finish tied with Mickelson at 8 under. Nick Taylor of Abbotsford finished even while Ben Silverman of Thornhill, Ont., was 2 over.

Watson, meanwhile, wrapped up another fun-filled week in L.A. on and off the golf course, which included an appearance in the NBA All-Star celebrity game, where he shot an air ball from just inside the top of the key and was rejected by Tracy McGrady driving – jogging, really – along the baseline toward the basket.

Watson once jokingly said he would retire if he reached 10 tour victories, though this should only motivate him more, especially with the Masters closing in. Watson already had two green jackets.

He finished at 12-under 272 and moved to No. 41 in the world, which makes him eligible for the World Golf Championship in Mexico City in two weeks.

Watson had a one-shot lead going into the final round, though this was up for grabs from the start. A week of sun made Riviera firmer than usual and penalized even the slightest mistakes, especially starting on the 12th hole when the course turns back toward the west and into the wind.

His big moment came on the 14th. Watson hit too big of a fade toward the left pin, and it came up short and into the bunker. He blasted out and watched it bang into the pin and disappear, and he pointed at caddie Ted Scott and said, “You called it.”

From there, he didn’t make any mistakes with regulation pars on the next two holes, two putts from 60 feet for birdie on the 17th and a safe par on the 18th.

Defending champion Dustin Johnson, starting the final round four shots behind after a 64 on Saturday, made a double bogey on No. 5 that derailed him. Johnson made a triple bogey on that hole in the opening round.