Bubba Watson works his way into the lead at Riviera 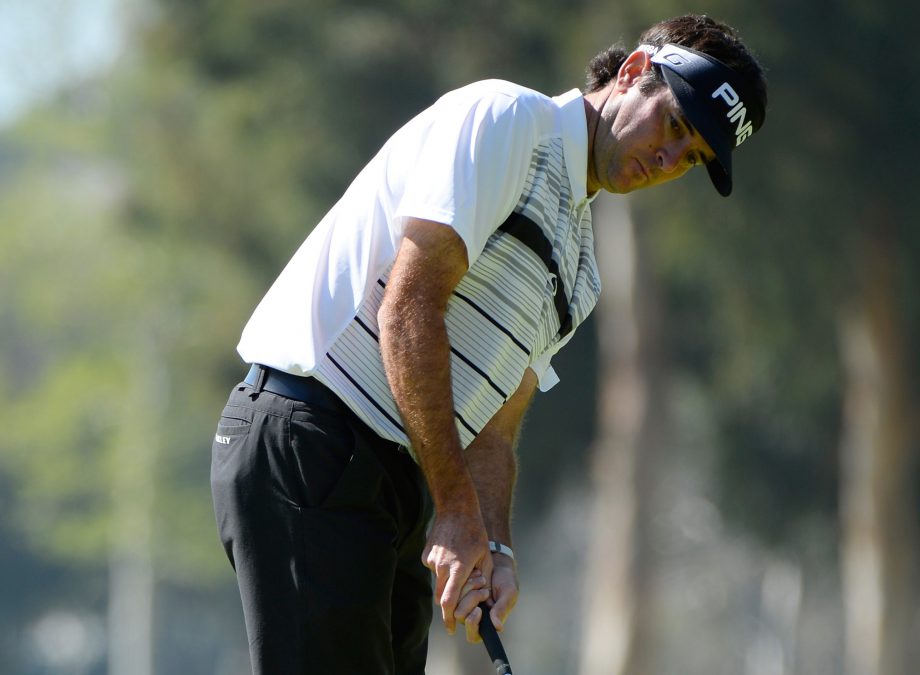 LOS ANGELES – Bubba Watson has the 54-hole lead at the Northern Trust Open, and that might not even be the most fun he’s had this week.

He took his 3-year-old son to hang out with Justin Bieber. The two-time Masters champion had a small part – one line that he said required four takes – in Disney Channel’s show “Girl Meets World.” And he couldn’t wait to leave Riviera on Saturday so he could get to an NBA game between the Los Angeles Clippers and Golden State Warriors.

“That’s the advantage is that I’m friends with a lot of the guys, friends with Steve Ballmer – I don’t know if you know him, he’s the owner of the Clippers,” Watson said.

Winning at Riviera for the second time in three years? That might be gravy.

Watson put himself in prime condition on a gorgeous afternoon along Sunset Boulevard with a 4-under 67, which included an efficient up-and-down for birdie on the par-5 17th to break out of the pack and a par save from the concession area down the hill and to the right of the 18th green.

Navigating the final 18 holes against a strong pack of contenders might be tougher than traffic on the 405.

Dustin Johnson and Rory McIlroy, Adam Scott and Hideki Matsuyama were all among the 10 players within three shots of the lead going into the final round. Watson was at 12-under 201, one shot ahead of Johnson, Jason Kokrak and Chez Reavie.

“We all feel good about our chances, even the guy that’s five back,” Watson said. “For me, I’m going to go out and try to do the same thing, keep my head down, try to take deep breaths and try to slow it down and hopefully it works out.”

Watson hit more fairways on Saturday (10) then the opening two rounds combined. He’s not bothered by being in the short grass as much as having the right angle to the green, and what has really left him at ease – as much as Watson is ever at ease – is making the short putts. He has made only three bogeys in 54 holes.

“Knowing that I’ve won here and knowing that I can play around here, obviously I have a little bit of an advantage on the guy that probably hasn’t won here,” Watson said.

Kokrak, the 36-hole leader, made three birdies on the back nine to salvage a 70 and remain in the final group. Reavie had a three-shot lead at one point on the back nine, courtesy of a perfectly placed drive that led to eagle on No. 2. But he missed a pair of 8-foot par putts on consecutive holes and had to settle for a 69.

For all the birdies, the final round was shaped largely by pars on the 18th hole.

McIlroy, making his debut at Riviera, made three birdies on the back nine to reach 10 under when he pushed his tee shot too far right on the 18th for the second straight day. This time, he played too much of a fade around the eucalyptus trees, and it tumbled down the hill next to the concessions stand. His chip raced by the hole, leaving a downhill par putt form 18 feet that he made for par.

“That’s one of the loudest cheers I’ve had in a while,” McIlroy said. “It would be nice to hear something like that again tomorrow.”

“Everyone is playing good, and it’s whoever probably wants it the most tomorrow makes it happen,” Scott said. “Not everyone is just going to fade away. It’s not that brutal hard and fast stuff where your slight miss is really punished and you can’t get it up-and-down.”

Watson’s par from about the same area was even better. He was able to clip the ball perfectly, and it checked up just 3 feet above the hole.

Matsuyama, who won in Phoenix two weeks ago, made five birdies on the front nine to get into the mix, only to put four 5s on his card on the back nine. He shot 68 and was three shots behind, along with Troy Merritt (70).

It’s still wide open, even with the experience at the top of Watson and Riviera, and the experience of winning anywhere by McIlroy, who’s at No. 3 in the world.

“It’s one of these golf courses, if you just stay around, hang in there and not make too many mistakes, stay patient, your time will come and it will present itself with a few opportunities,” McIlroy said. “And thankfully on the back nine, I was able to take some of them.”