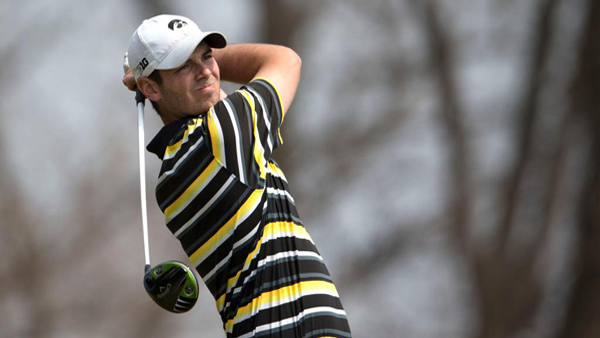 Winnipeg, Man. – Brian Bullington and Jonathan Garrick share top spot on the Canadian Men’s Amateur Championship leaderboard after opening with 6-under 66’s. Bullington of Frankfort, Ill., played on the morning side of the draw at Southwood Golf and Country Club. He carded a 4-under 32 closing nine that was highlighted by four birdies over his final seven holes to vault into the early lead.“I made like a 35-footer footer on No. 1 and on No. 2 I didn’t get up and down, I hit a spike mark which kind of kicked me into gear,” Bullington said. “I birdied the next three which was awesome and I knew that No. 7 was straight downwind so I knew if I could get that I’d probably be in a good position.”Playing in the final pairing of the day Jonathan Garrick of Atherton, Calif., matched Bullington’s round with a bogey-free 6-under 66. The UCLA Bruins’ junior birdied his two final holes to grab top spot heading into Tuesday’s second round that will be split between Elmhurst and Southwood Golf and Country Club. “I birdied No. 10 to start of the back nine and in the middle I made one more but then missed a few opportunities, it was good to finish with two birdies,” Garrick said. “I’ve been playing well but I haven’t been scoring well, I’ve just been kind of waiting for it to all come together and it seems like this week it’s going to go that way.”Leading the way for the Canadian contingent was Manitoba’s Josh Wytinck and Team Canada’s Garrett Rank of Elmira, Ont. who opened with a pair of 5-under 67’s. Wytinck of Glenboro, Man. carded seven birdies on Monday, while an eagle on the par-5 fifth hole highlighted Rank’s round.“I’ve just been hitting it so well and usually when I feel pressure or nerves it’s usually when I’m not playing well,” Wytinck who plays for the University of Manitoba Bisons’ said. “I’ve been playing so well that I’m very confident in myself that if I made putts I’d shoot something like this.”Colombia’s Ricardo Celia shares third place alongside Rank and Wytinck. Celia finished tied for fourth at the 2013 Canadian Men’s Amateur Championship and opened his 2014 campaign with six birdies at Southwood Golf and Country Club. In the Willingdon Cup team competition, Team Ontario’s squad of Rank, Corey Conners of Listowel, Ont. and Chris Hemmerich of Kitchener, Ont. lead the pack after opening with a 7-under 137 team total. Alberta’s A.J. Armstrong of St. Albert, Banff’s Jack Wood and Tyler Saunders of Sturgeon Country trail the trio of Team Canada’s National Squad members by three strokes heading into Tuesday’s final day of Willngdon Cup action. Monday’s opening round was contested at both Elmhurst Golf and Country Club and Southwood Golf and Country Club. Robert Ellis of St. Catharines, Ont. and Sam Saunders of Albuquerque, New Mexico carded the low rounds of the day at Elmhurst after posting 3-under 67’s to sit in a tie for 11th.For a full field list as well as starting times, live scoring and post-round results for the 110th playing of the Canadian Men’s Amateur Championship, click here.