Busy stretch ahead for Brooke Henderson 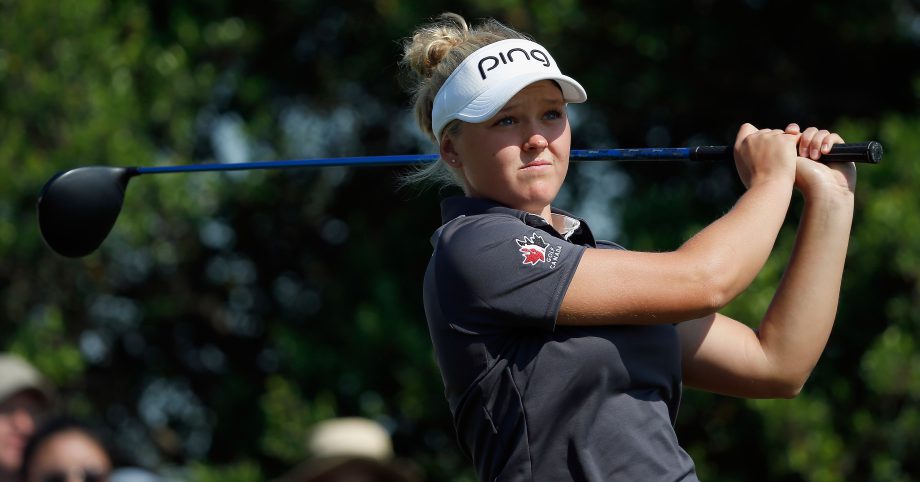 LANCASTER, PA. – Brooke Henderson might be a little worse for wear after a minor car accident last week, but that’s not stopping the 17-year-old from a busy stretch of golf.

It starts with the Women’s U.S. Open this week as Henderson continues to try to earn enough money to qualify for her LPGA card for next season.

The goal is to earn as much as 40th place on the LPGA money list (she would currently be 22nd with $317,000). She cannot be a member of the LPGA Tour until she turns 18 (in September) and has been turned down in her request for a special age exemption.

The LPGA has ruled it will count her money earned this summer as official when she turns 18. If she earn as much as 40th place on the money list (which looks like it might be about $450,000) she will earn her card for 2016.

After winning on the developmental Symetra Tour last month and being granted membership, she could also earn her card by finishing in the top 10 on that Tour’s money list.

That’s why she withdrew from competing for Canada at the Pan-Am Games next week. She’ll be playing the Symetra Tour event in Rochester, N.Y. to try and boost her chances.

Henderson said she remains confident choosing the Symetra Tour over the Pan-Am Games was the right thing to do.

Her other options to earn an LPGA card are by winning one of her remaining Tour starts. The last resort is going through qualifying school in the fall.

After another Symetra Tour event in Albany, Henderson will be off to the Ricoh British Women’s Open at Trump Turnberry Resort in Scotland  July 30-Aug. 2. She was granted a special exemption for the women’s major.

At this point, her last chance to earn money on the LPGA Tour will be at the Canadian Pacific Canadian Women’s Open Aug. 17-23 at the Vancouver Golf Club in Coquitlam, B.C. The championship will be her sixth and last sponsor’s exemption, the most allowed for an LPGA non-member.

There remains a chance she could play in more LPGA events by Monday qualifying.

In the meantime, she could take a big step this week with another strong performance at the U.S. Open. She finished tied for 10th last year at Pinehurst as an amateur which earned her a place in the field this week.

This is the most lucrative event in women’s golf with a pursue of $4.5 million, the United States Golf Association announced Wednesday. The winner will receive $810,000. Tenth place is worth $121,500.

“I’m in a good position. I’m far from being safe with that top 40 though, and I know that my next three tournaments – this one, British and Canadian Open – will be really important,” she said. “That’s another reason why this week it’s really important that I play and that I play well.”

Henderson’s leg was a little sore after her accident – which caused her to withdraw from the Symetra Tour event in Michigan last week – but after a couple of trips over the Lancaster C.C.’s rolling hills, she’s ready to go.

“I’m excited for this week. There’s a reason why I’m ready to play and I want to see what I can do with it. It’s been an interesting week, but I’m very grateful to be here,” Henderson said. “It’s by the grace of God that I’m here this week and able to play.

“I think I have to take the most out of this opportunity.”