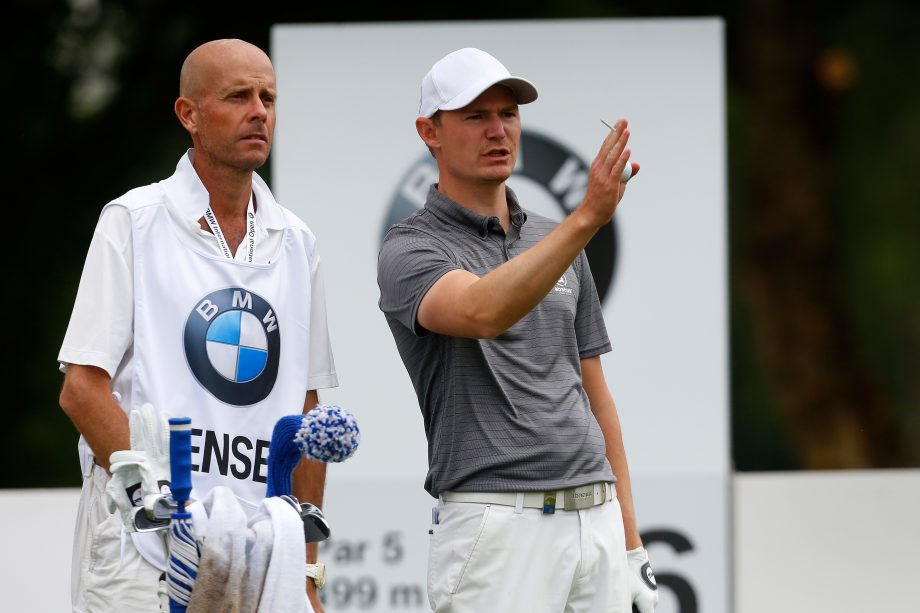 Lasse Jensen (R) of Denmark lines-up a drive with the help of his caddie during the BMW International Open day one at the Eichenried Golf Club on June 25, 2015 in Munich, Germany. (Paul Thomas/Getty Images)

MUNICH – Spain’s Rafa Cabrera-Bello overcame two bogeys to shoot a 7-under 65 for a three-way share of the lead in the opening round of the BMW International Open on Thursday.

Cabrera-Bello was joined by Lasse Jensen of Denmark, who holed seven birdies, and Daniel Gaunt of England, who overcame a bogey with eight birdies of his own on the Eichenried Golf Club course.

Early leader Andrew Johnston of England finished one stroke behind after starting on the 10th hole with a bogey, then carding seven birdies for a 66.

Five players were tied for fifth on 67, including Henrik Stenson, the champion in 2006. The Swede recovered from a triple bogey on the par-4 16th with eight birdies altogether.

“I got off to a pretty good start and I didn’t do too much wrong on 16 but wound up with a triple bogey. I hung in there and tried to just keep on going. Then I wrapped up with a nice string of birdies on 5, 6, 7 and 8,” said Stenson, who has broken par in 14 consecutive rounds.

James Morrison and Tommy Fleetwood of England, Kiradech Aphibarnrat of Thailand, and Victor Riu of France joined Stenson in fifth.

Local favorite and 2014 U.S. Open winner Martin Kaymer made up for a double bogey and two bogeys with four birdies to finish on level par, while two-time winner Thomas Bjorn was one over par after three bogeys.