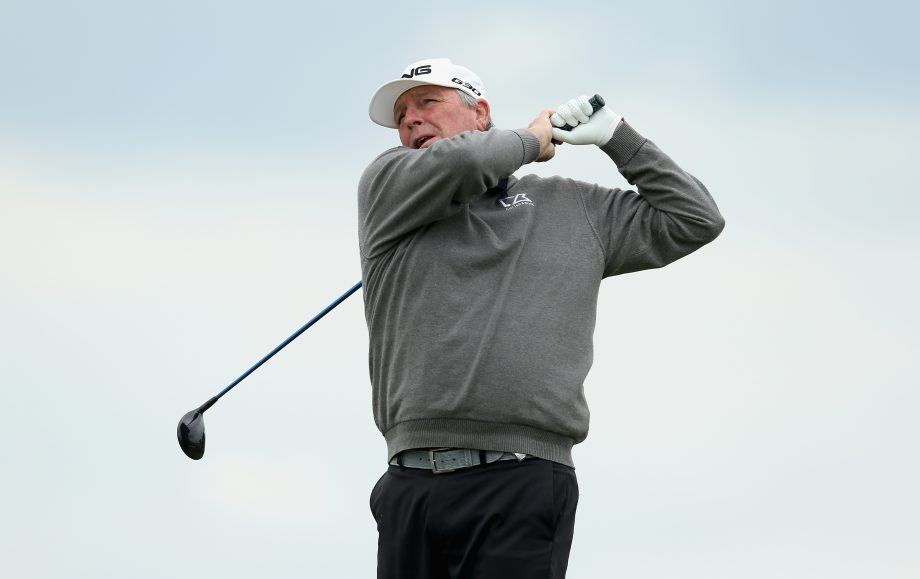 DES MOINES, Iowa – Mark Calcavecchia was carrying groceries into his brother-in-law’s house on Thanksgiving morning when he stumbled.

Calcavecchia’s right hand went through two panes of glass, slashing a tendon and leaving a finger dangling. Six months later, the 1989 British Open champion is finally playing like his old self.

Calcavecchia made a 15-foot birdie putt on the final hole Saturday for a 4-under 68 and a one-stroke lead heading into the final round of the Champions Tour’s Principal Charity Classic.

“I like it here,” said Calcavecchia, who grew up in nearby Laurel, Nebraska. “A lot of good things going on here for me.”

Calcavecchia had a 9-under 135 total at Wakonda Club.

Joe Durant was second after a 68. Paul Goydos, Brian Henninger and Michael Allen were tied for third at 7 under, all shooting 70.

The 54-year-old Calcavecchia had surgery in early December. He couldn’t swing a club for three months, and the lingering pain has limited the time he can spend on the range.

Calcavecchia entered the week with just one top-10 finish in seven events. He has two career victories on the 50-and-over tour after winning 13 times on the PGA Tour.

“There’s still a whole bunch of guys that can win. So, basically (Sunday), I’m just trying to do what I’m doing,” said Calcavecchia, who has notched top 10s in each of his four previous trips to Iowa.

He’ll join Calcavecchia in Sunday’s final group in search of his second win of the year.

“I just didn’t get flustered,” Durant said. “I think you just have to stay very patient on this golf course. … The leaderboard is really bunched up. Someone is going to come out and shoot a good round. It’s going to take a good round from any of us to have a chance to win. But you just play the first round to put yourself in position.”

Billy Andrade, tied for the first-round lead after a 66, double-bogeyed his first hole Saturday and stumbled to a 76. He was tied for 32nd at 2 under

Jose Coceres, who joined Andrade atop the first-round leaderboard, shot a 73 to drop into a tie for 11th at 5 under.

One of tour’s oldest players made one of the best shots in the 15-year history of the Iowa event.

Larry Nelson, 67, used an 8-iron to ace the 172-yard 17th hole. It was the second hole-in-one for Nelson on the Champions Tour. He celebrated by tossing his ball to the crowd.