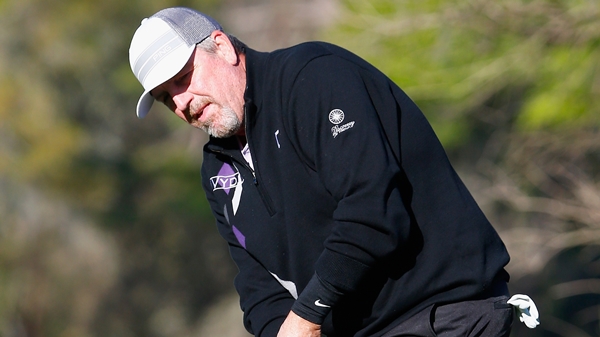 BIRMINGHAM, Ala. – Mark Calcavecchia made an 8-foot birdie putt on the final hole Friday to take a one-stroke lead over Jay Haas after the second round of the Regions Tradition at Shoal Creek.

Calcavecchia shot his second straight 3-under 69 to reach 6 under, while Haas had a 70 after they came in as part of a four-way tie at the Champions Tour major.

Haas missed a 4-footer on No. 18 to give Calcavecchia a shot at sole possession of the lead at the midway point. Calcavecchia said finishing with a birdie improves his mood, lead or no lead.

“It really doesn’t matter, other than the fact that I’m happier that I made the putt on the last hole, made the 8-footer for birdie as opposed to missing it,” said Calcavecchia, who is seeking his first Champions Tour win since the 2012 Montreal Championship. “Sixty-nine sounds better than 70, it always has.

“It always feels good to birdie the last hole. Leading as opposed to being tied for the lead, that makes no difference whatsoever to me.”

He aggravated a rib problem late in Thursday’s round and had upper back spasms. Calcavecchia said it began flaring up again after swinging starting on No. 14 Friday.

Kenny Perry and Olin Browne were 4 under. Perry had a 68, and Browne shot 71. Browne was part of the first-round logjam along with Chien Soon Lu, who shot a 77.

Haas birdied the first four holes, and Calcavecchia had three birdies on the first six holes.

“I didn’t put myself into a lot of bad positions,” Haas said. “Being 4 under after four was kind of a dream start and it kind of slowly got away from me. But I like my position. I feel pretty good about my situation going into the weekend.”

He bogeyed No. 5 after landing in the bunker and then three-putted No. 15 for another bogey. Haas followed that with a 35-footer for birdie on No. 16.

Calcavecchia also had a bogey on the 15th hole after having a bad lie about 10 yards right of the green. He chipped it some 15 feet past the hole.

Calcavecchia said he started his round knowing Haas had gotten off to a good start and that Tom Pernice Jr. – who finished with a 70 and was four strokes back – had also opened with four straight birdies. Beyond that, he said he’s not a scoreboard watcher.

“There’s no point in really looking at this stage,” Calcavecchia said. “You’re just trying to play the course and make as many birdies as possible and pars. Still a long way to go. If it was a three-rounder like most of our regular tournaments, it would be a little different story maybe. But we’re only halfway done.”

“I look at scoreboards all the time,” he said. “I like seeing my name up there and seeing what’s going on and all that. It’s such a long race and there’s so much golf left to be played that I’m not too concerned about one shot here and there. You hate to throw any shots away obviously, but I’m still feeling pretty good about where I am.”

Perry had three birdies on the final nine holes and was already looking forward to Round 3.

“Saturday’s the rocking chair day as I call it, and I’ve got to make my move on that day,” said Perry, who also had two bogeys. “I need to shoot another one of these or a little better to get back into it for Sunday.”

Canada’s Rod Spittle is tied for 36th after a second round 75. He’s 3-over par thru two rounds and nine off the pace.

The other Canadian in the field, Jim Rutledge, is tied for 56th at 6-over par.

Defending champion David Frost was five strokes back and two-time winner Tom Lehman was six away from the lead. Both had 71s.