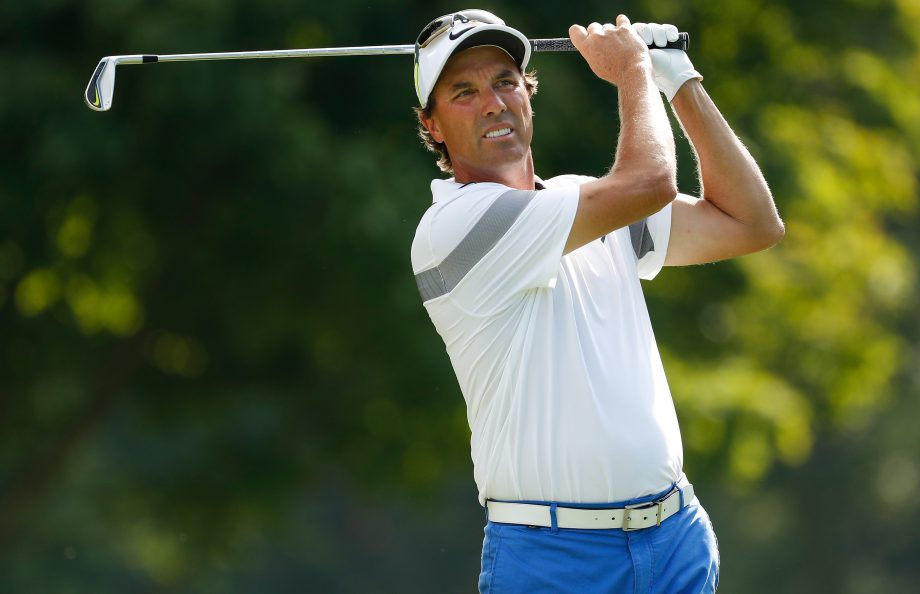 UPPER ARLINGTON, Ohio – Joey Sindelar, one of four former Ohio State players in the U.S. Senior Open at Scioto Country Club in suburban Columbus, has felt the support of the hometown crowd all week.

It apparently was a big help Friday. The 58-year-old Sindelar shot a 4-under 66 on a hot and humid day to take the second-round lead. He had five birdies, including two in a row after a bogey on No. 5. After finishing the first round with a 69, he was at 5 under overall.

“I’ve never been unconvinced that that many people in your corner, as the four of us have witnessed this week, cannot somehow kind of talk you into what might happen,” Sindelar said.

His highlight was a 40-foot birdie putt on the par-3 17th, after pars on the six previous holes.

“I’m seeing the line very well, and I seem to be able to hit the ball where I’m looking, and so far it’s been a fun week with the putter,” said Sindelar, whose best finish in a senior event was a second in 2009.

Billy Mayfair, making his first senior start after turning 50 last Saturday, was a stroke back after a 67. He had four birdies and a bogey.

Calgary’s Stephen Ames collected five birdies on the day en route to a 68. The Canadian Golf Hall of Fame member holds a share of fourth alongside Glen Day of Little Rock, Ark. Rod Spittle of St. Catharines, Ont., posted a 70 and is T58 at 7-over.

First-round leader Vijay Singh followed his opening 66 with a 75 to drop into a tie for eighth at 1 over.

“I didn’t hit that many fairways,” Singh said. “It was a lot windier today. I got some bad breaks, didn’t putt as well. But all in all, I managed. I didn’t play as bad as what the score reads.”

Defending champion Jeff Maggert also was 1 over after a 71. He won last year at Del Paso in California.

Sindelar said stamina has been factor for the 50-and-over players in the blistering heat and high humidity. For one thing, Sindelar said he also had trouble keeping his hands dry on the club. The conditions also have worked in their favor, with the course playing hard and fast.

“Some of us have aged way different than others,” he said. “I’m extremely arthritic so the heat is good for me. It keeps me loose so I’m kind of enjoying it. But, boy, at night we’re cramping no matter how much you drink. Everybody got beat down a little. It’s just tough physically to go through that out there.”

John Daly had an 81 to miss the cut. He had three double bogeys, six bogeys and a birdie.

Because of the threat of rain Saturday, the players will play in threesomes starting at about 7:30 a.m.