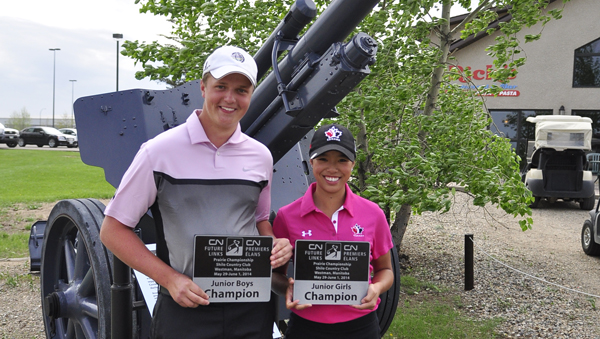 Westman, Man. –  Junior players from across the country gathered at Shilo Golf and Country Club in Westman, Man. this weekend for the 2014 CN Future Links Prairie Championship, the third CN Future Links Championship of the season. Jaclyn Lee and Andrew Brown, both of Calgary, Alta. claimed their division titles after three exciting rounds of play. Team Canada Development Squad member Jaclyn Lee took the Junior Girls division by storm, finishing in first place by 13 strokes. Lee has more than just a champion title to be proud of though– the 17 year old broke a course record at Shilo during the tournament’s second round on Saturday.  Lee played a combination of middle tees to score a 5-under-67, breaking the women’s overall course record.  “I’m really happy with how this weekend turned out,” said Lee on Sunday evening. “The course record and the bogey-free round were both firsts for me, but the weather definitely made things challenging today. The course didn’t seem too difficult at first, but once the wind picked up it became a very tough course to play.” Lee finished the championship with a score of 2-under-par 214 after rounds of 71-67-76. Alisha Lau, 14, of Richmond, B.C. followed in second with a final score of 227, and Alexandra Demko, 15, of Thunder Bay, Ont. finished in third with 232. In the Junior Boys division, Andrew Brown sat in third behind Zach Sackett of Calgary, Alta. and Keaton Gudz of Victoria, B.C. after Friday’s first round of play.  “I just stuck to my game, kept my ball in place, and made a lot of putts,” Brown said when asked about his stellar second round of play, which put him ahead of Gudz by three strokes. Brown shot 71-69-75 for a final score of 1-under-par 215. Sackett shared second place with West Vancouver’s Owen Xiong with a final score of 4-over-par 220.  15- year-old Gudz follows the pair by one stroke, finishing the Championship with a final score of 5-over-par 221. The top six competitors in the Junior Boys division of each CN Future Links Championship will earn exemptions into the 2014 Canadian Junior Boys Championship, which will be contested July 28 – August 1 at the Legends on the Niagara Battlefield course in Niagara Falls, Ont. The Junior Girls champion from each CN Future Links Championship will earn an exemption into the 2014 Canadian Junior Girls Championship which runs July 28 – August 1 at the Thornhill Golf and Country Club in Thornhill, Ont.  In addition, the champion receives an exemption into a 2015 Canadian Women’s Tour Event.