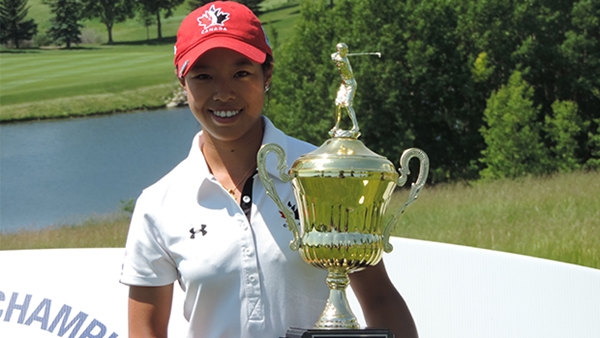 Calgary – Jaclyn Lee, a member of Team Canada’s Development Squad, capped off the Alberta Junior Girls Championship with a final round 73 to defend her title at Bearspaw Country Club, winning by 4 shots over Development Squad teammate Sabrine Garrison.

“It hasn’t really settled in yet,” said Lee. “I never thought this would happen. I’m really excited to win these past two weeks.”

Despite bogeys on holes 1, 2, and 4, Lee was able to overcome her erratic start with birdies on 5, 8, and 9 before cruising through the back nine to cap off the championship in convincing fashion.

At 17-years-old, Lee is still eligible to play in 2015 and will attempt to defend her title once more, hoping to become the fourth player to win three or more Alberta Junior titles.