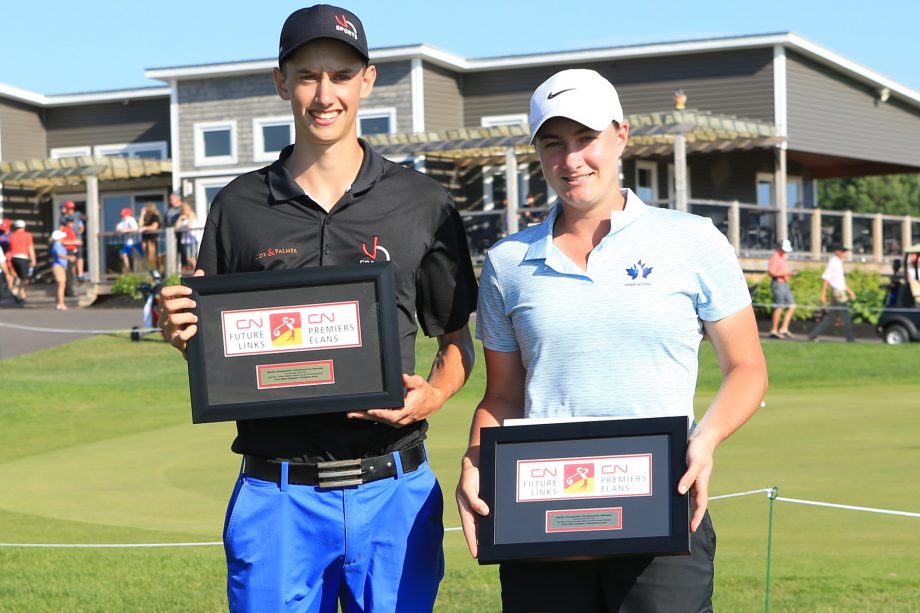 FAIRVIEW, P.E.I. – The 2016 CN Future Links Atlantic Championship concluded in much the same way it began – with Calvin Ross and Allison Chandler atop their respective leaderboards. The duo successfully persevered through blustery conditions at Countryview Golf Club to defend their 2015 Junior Boys and Junior Girls titles.

Calvin Ross completed the back-to-back victory with a 1-under final-round showing. The 17-year-old emerged victorious at the 2015 edition of this event at Gowan Brae Golf Club in Bathurst, N.B. A six-birdie day kept the Fredericton, N.B., native four strokes ahead of the 84-man field for a 4-under 212 final tally.

“It feels great to repeat. I played well all week and I’m excited that my work paid off,” said Ross. “The wind was moving the ball a lot in the air and knocking it down. As long as you kept the ball in play and made some low shots, it wasn’t too bad.”

Ross will make his third appearance at the Canadian Junior Boys Championship where he hopes to deliver his best result.

“I’ve improved every year. I was happy to make the cut in my first year and last year I was T43. This year, the goal is definitely to be in the Top-10, but if I’m playing really well, I might be looking to win.”

Allison Chandler completed her wire-to-wire Junior Girls win with a 2-over 74 final round to finish at even-par 216. The Chester, N.S., native earned a 14-stroke victory to secure her second CN Future Links Atlantic Junior Girls title in as many years.

“I think I played through the wind really well. I had a few struggles from the green, but overall I was pretty happy,” said Chandler. “The greens were a little quick today because of the wind, but the course has otherwise been in great shape the past three days.”

A T22 finish at the 2015 Canadian Junior Girls Championship at Deer Park Municipal Golf Club in Yorkton, Sask., motivated Chandler throughout the week in her bid to return to the National Championship.

“With it being my last year on the Junior circuit, my goal is to finish higher than I have before. I’m just going to try and play as aggressively as I can without making too many mistakes.”

Heather McLean of Port Williams, N.S., shot 77 to move into second-place at 14-over, one-stroke ahead of Toronto’s Sarah Beqaj.

Competitors in the Top-6 in the Junior Girls division have secured their places into the Canadian Junior Girls Championship at The Links at Penn Hills in Shubenacadie, N.S., August 2-5. Chandler, McLean and Beqaj will be joined by Laura Jones (Moncton, N.B.), Meghan McLean (Port Williams, N.S.) and Laura Wesselius (Intervale, N.B.).

Additional information regarding the 2016 CN Future Links Atlantic Championship can be found here.