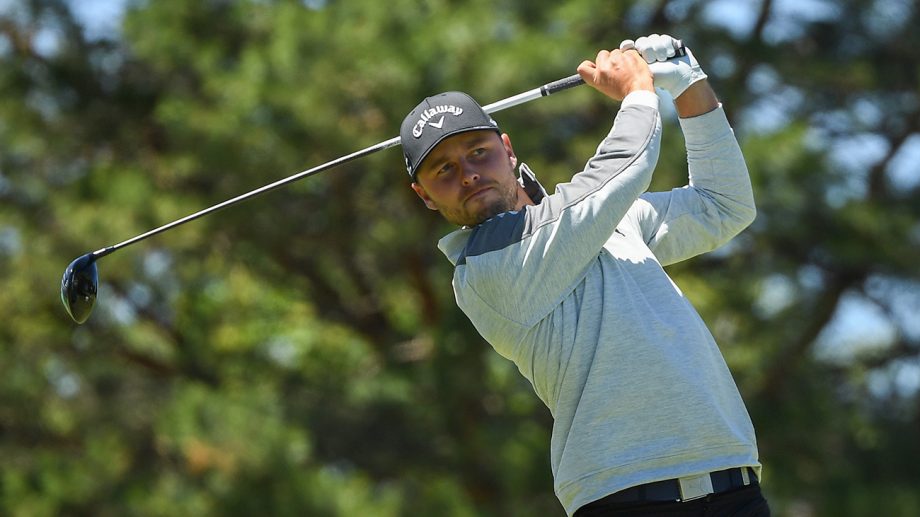 GLENVIEW, ILLINOIS - MAY 29: Adam Svensson of Canada plays his tee shot from the second hole during the third round of the Evans Scholar Invitational at the Glen Club on May 29, 2021 in Glenview, Illinois. (Photo by Quinn Harris/Getty Images)
Korn Ferry Tour Communications

GLENVIEW, Ill. – Turns out Cameron Young is mortal after all. And the rest of the field still couldn’t catch him.

For the first time in two weeks, Young made a costly error and knew the position he put himself in was one of the toughest at The Glen Club’s links-style course. Young blasted his approach at the par-4 second over the green, left his chip shot off a downhill lie short and in the rough, then chipped on and two-putted for six. The double bogey negated an eagle from the par-5 first, but it was not enough to knock Young off the top spot of the leaderboard at the Evans Scholars Invitational presented by First Midwest Bank.

Young logged five birdies and a bogey the rest of the way, carding a 4-under 67 and extending his lead over Northbrook, Illinois native Nick Hardy to four strokes. It is the seventh consecutive Korn Ferry Tour round Young has at least a share of the lead, as well as sixth time in the last seven rounds he leads outright.

The Scarsborough, New York native entered Saturday’s third round as the only player with fewer than three bogeys through 36 holes this week. Although Young doubled the second and bogeyed the par-3 11th later in the round, he still has fewer holes played over par than anyone in the field. Young only made five bogeys, tied for the third fewest of the tournament, in last week’s wire-to-wire win (solo leader after every round) at the AdventHealth Championship.

In addition to making fewer mistakes than anyone else, Young’s three eagles (one in each round) are tied with University of Illinois alum Luke Guthrie for the most in this week’s field. Young’s round-opening eagle Saturday was a drive in the fairway, followed by a 6-iron from 223 yards out, and a 25-foot putt.

A par save off another downhill lie behind No. 3 green gave Young a quick boost, which he turned into birdies at Nos. 4 and 5. The birdie at the par-5 fifth came after Young escaped the trees on his second shot and knocked a wedge to eight feet. Four pars later, Young drove the 333-yard par-4 10th and notched a two-putt birdie. A bogey from the greenside bunker at the 11th cost him a shot, but Young got it back with a tap-in birdie at the par-4 15th. Young capped the round with a two-putt birdie from just left of the green at the par-5 18th.

“I don’t think I hit it that great. I made a couple putts early,” Young said. “After that, I didn’t make much. I think I have a lot more in me.”

Four strokes is double what Young’s lead was after 54 holes in Kansas City, Missouri a week ago. Even with the added cushion, Young knows he can ill afford to play cautiously, or try to protect his lead Sunday afternoon.

Hardy, a two-time All-American and the 2018 Big Ten Player of the Year at the University of Illinois, rallied from a 3-over 39 on the front nine with a bogey-free 4-under 31 on the back nine.

Even as Hardy provoked roars from the crowd after a long, double-breaking birdie putt went down at the par-3 11th, as well as dazzling approaches at the par-4 13th and 15th, Young stayed in his own zone.

Scott McKean, Young’s caddie, is a major reason why they’re able to operate within their own little world. The two were close friends at Wake Forest University. McKean was also the best man at Young’s wedding. Young’s connection to McKean feels especially important this week, given the fact this event raises funds to support the Evans Scholars Foundation and its efforts to send caddies to college on full tuition and housing scholarships.

When Young needed a caddie for last August’s Albertsons Boise Open presented by Chevron, the third week the four-tournament run which earned him Special Temporary Membership status, McKean picked up the bag. Working for cybersecurity company, McKean took some time off, but also worked remotely while on the road. Young called McKean two weeks later for the Korn Ferry Tour Championship presented by United Leasing & Finance. Once again, McKean took off work and joined Young in Newburgh, Indiana.

Young made an even bigger ask in late September. He needed a caddie for three straight weeks. McKean asked if he could call back with an answer.

“He called me back an hour and a half later and had quit his job,” Young said. “He’s giving up a lot to be away from home a lot, and not necessarily get to play golf, do other things he likes to do. But we have a great time. We have a lot of fun. It makes the travel and the long days a lot easier.”

Drawbridge, the cybersecurity company McKean left, is embroidered on Young’s polos. It’s an ever- present reminder of what the stakes are, what sacrifices have been made, and what potentially lay ahead.

A victory Sunday would move Young from 26th to 12th in the 2020-21 Korn Ferry Tour points standings. More simply, finishing off a second win in as many weeks would take Young to the verge of his first PGA TOUR card.

“Very thankful to be where I am. I knew what it felt like to be missing Monday qualifiers and making $50 in mini-tour events,” Young said. “I’m most of the way to where I want to go. I want that last little bit to be soon. That’s where I have my eyes set.”