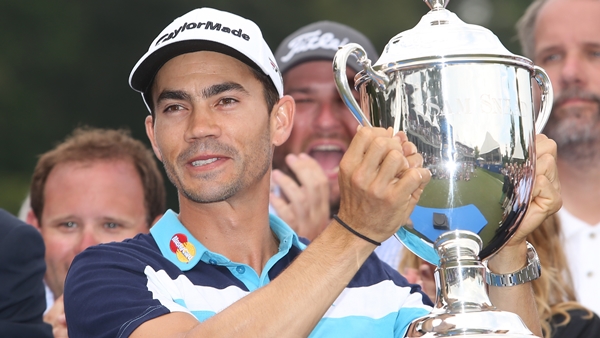 GREENSBORO, N.C.  – When Camilo Villegas finished his final round in the Wyndham Championship, he was hoping to get into a playoff.

Instead, every other contender stumbled, and the Colombian didn’t have to hit another shot to win his first PGA Tour title since 2010.

Villegas had four birdies and an eagle on the front nine, added a birdie on the par-5 15th and watched the rest of the tournament from the air-conditioned scorer’s tent with his caddie.

“I was hoping for a playoff,” Villegas said. “I thought I needed one more (stroke).”

Turns out, he didn’t. When the rest of the field struggled late, he wound up with his fourth PGA Tour title and first since the 2010 Honda Classic.

He also became the second first-round leader to win the tournament since its 2008 move back to Sedgefield Country Club and first since Arjun Atwal in 2010.

Bill Haas and Freddie Jacobson tied for second. Haas had a 64, and Jacobson shot 66.

Jacobson needed a par on the final hole to force a playoff, but he rolled his 11-foot putt inches past the hole.

Heath Slocum was two strokes back after his 67. Brandt Snedeker, Webb Simpson and third-round leader Nick Watney were at 14 under.

Ottawa’s Brad Fritsch finished tied for eighth at 13 under.

Villegas had to wait about 40 minutes after his round ended before his victory was secure.

He closed his round with three straight pars, tapping in from about 2 feet on 18 and hoping it was good enough.

It was – once the crowd thinned itself out.

“When the boys got closer to the last hole, you can get a little anxious,” Villegas said. “You don’t have a golf club in your hand. You can’t really control it.”

Watney was at 17 under and appeared headed for his sixth PGA Tour victory before he ran into trouble on 14 and picked up his third bogey of the tournament and second of the day.

He followed with three straight pars, leaving him needing a birdie on the final hole to tie Villegas.

He had one on Saturday – but couldn’t do it again.

He wound up with a double bogey after his tee shot bounced past a cart path and out of bounds.

“I knew what was at stake, and I pushed it a little bit,” Watley said. “Extremely disappointed. If you said at any point, you birdie (the) last hole, you’re in a playoff, you would take it. … That was really a bad shot at a really bad time.”

The Swede’s second shot on 18 fell short of the green and his 70-foot birdie putt from the front edge rolled well past the hole before he was wide with his par putt.

“It really sucks when you play solid all day and, you know, I really thought it was my day coming in,” Jacobson said. “All I needed was a solid strike to get up there and good feed in and have a good chance of winning.”

Congestion atop the leaderboard was expected after 12 players entered their last trip around Sedgefield within three strokes of third-round leader Watney, who was at 14 under through three rounds.

And Villegas wasn’t one of them.

He began five strokes back but made a quick trip up the leaderboard, with three birdies and an eagle among his first five holes to move to 15 under and put himself within striking distance.

The other main subplot here this week was the last-gasp push for spots in the PGA Tour’s playoffs, which begin next week at The Barclays in New Jersey.

Slocum, who arrived at No. 158 on the points list, was briefly at 17 under but slipped off the pace by closing with two bogeys that also helped keep him out of The Barclays field. He finished at No. 129.

Paul Casey, 125th at the start of the week, tied for 18th to put himself safely in the field. Sang-Moon Bae played his way into the playoffs with a tie for 14th that moved him to No. 120. Jhonattan Vegas was at No. 124 but kept himself securely in the field with his tie for eighth.

“The goal was definitely to move on to next week,” Vegas said. “Mission accomplished.”