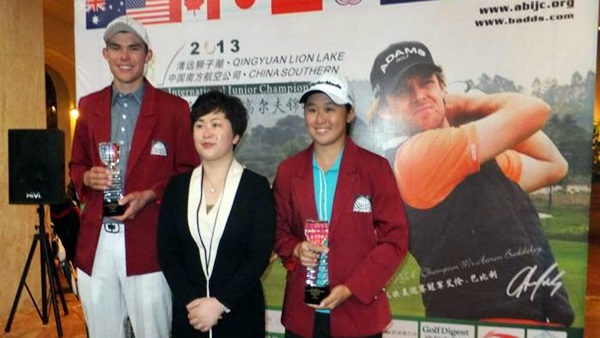 After a week of sunshine, rain finally fell during the final round of the Aaron Baddeley International Junior Championship in Qingyuan, China. With course conditions worsening throughout the day, Zach Murray of Australia hung on to win the boys division with a 280 (-8) total. Guan Ru-qing from China claimed the girls division also shooting 280 (-8) and for the fourth straight year Australia (1450) took home the team title.

Canadian Junior Golf Association’s (CJGA) Team Canada (1535) made a final round charge to move into the fifth place but could not overcome their slow start from earlier in the week and ended the tournament in six place. Steven Lee of Kelowna, BC and Trevor Yu of Vancouver finished the tournament as top Canadians tied in 16th place.

Lee started his day rolling in two birdies on holes 7 and 8 to finish the front nine with 34 (-2). All was well for Lee until hole 14 where he failed to get up and down to save par. Things continued to unravel for Lee on 15 with a double bogey. With bogeys on holes 17 and 18 Lee finish the day shooting 75 (+3). Teammate Trevor Yu quickly got off to a good start with birdies on holes 1 and 3. Another birdie on 16 had Yu was under par for the day at -2 but it was not to be. With an errant approach shot on 18, Yu could not recover and finished the round shooting 72 (E).

In the Girls division, Sophie Liu of Surrey, BC continued to support her team by posting an eight over 80. Starting off the back nine, Liu struggled out of the gate with a bogey and triple bogey on holes 11 and 12. Quickly settling down Liu birded hole 13 and pared out for a 39 (+3). With the rain getting heaver Liu ended her day with 3 bogeys and a double bogey for a score of 41 (+5) and a total of 80 (+8).

“The team represented Canada and themselves in a first-class manner,” said CJGA Team Manager, John Lawrence. “Moving forward, the experience gained here in China will be a great benefit to our players. Sixth place isn’t what we had in mind when we first arrived, but I am very proud of the effort our players displayed on and off the course.”