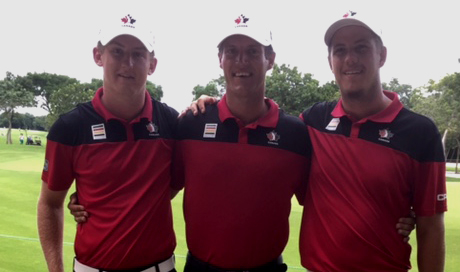 RIVIERA MAYA, Mexico – On the strength of Garrett Rank’s 69 (-2), the Canadian contingent climbed inside the Top-10 for the first time in Saturday’s final round of the 30th World Amateur Team Championship to close the tournament in a tie for ninth at 12-under par.

Playing on the Mayakoba El Camaleon Golf Club, Rank, 29, led the Canadian trio to a team score of 2-under par on the day, coupled with Jared du Toit’s even-par 71. Collectively, Rank was the leading Canadian at the event. The Elmira, Ont., product finished at 1-under par (74-72-70-69) to hold an individual share of 35th.

Kimberley, B.C., native Jared du Toit finished two strokes behind Rank at 1-over par (71-70-75-71). The 21-year-old Arizona State senior closed at T44. Teammate Hugo Bernard of Mont-St-Hilaire, Que., was disqualified because of a scoring error in his final round.

“Our guys gave it their best this week and I’m proud of the fight they put up to get inside the Top-10,” said Ingram of the Canadian squad, who stood tied for 27th following Wednesday’s opening round. “An unfortunate mistake with Hugo’s scoring, but we’ll look at it as a learning experience for everyone.”

Australia extended their commanding lead, closing with a final-round team score of 6-under to win the tournament at a record score of 38-under par, 19 strokes ahead of runner-up England. The victory marks the fourth time Australia has come out on top at the World Amateur.

Austria and Ireland rounded out the top-3, sharing third place honours at 18-under par.

Australia’s Cameron Davis was the lone player to tally four rounds in the 60s, earning him medalist honours at 17-under par, with teammate Curtis Luck finishing second at 15-under.