Canada holds share of 27th after first round of World Amateur 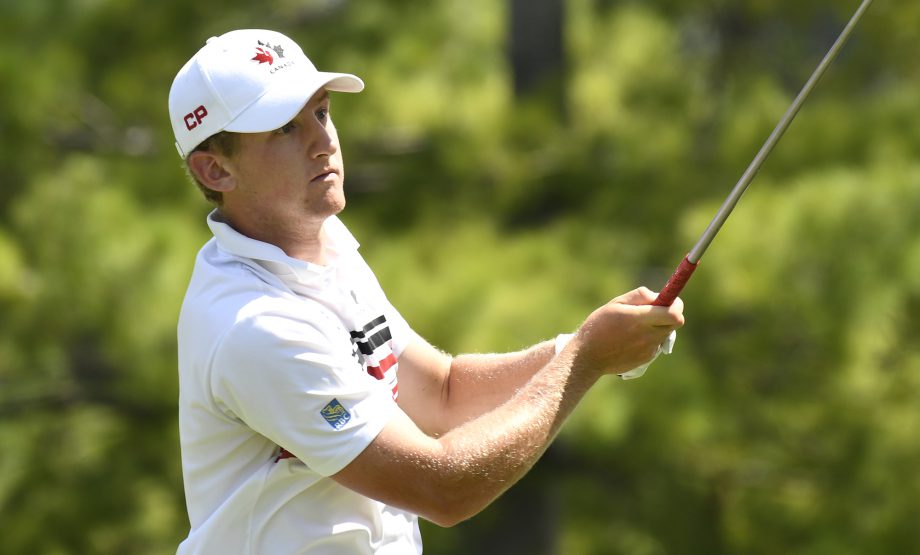 RIVIERA MAYA, Mexico –  The Canadian contingent of Jared du Toit, Hugo Bernard and Garrett Rank struggled out of the gate in the 30th World Amateur Team Championship, posting a collective score of even-par (144) to hold a share of 27th after the first round.

The trio was led by 21-year-old Jared du Toit of Kimberley, B.C., who carded a 71 (-1) on the Iberostar Playa Paraiso course—one of two courses in rotation this week. Individually, the Arizona State senior sits T34, five off the pace.

Team Canada’s second-counting score of the day was registered by Hugo Bernard of Mont-St-Hilaire, Que. The 21-year-old reigning Canadian Amateur champion scored a 1-over 73 to find himself in a tie for 77th through 18 holes of play. 29-year-old Garrett Rank of Elmira, Ont., recorded a non-counting 74 (+2), fighting back after slipping with a double and triple bogey in his first five holes.

Connor Syme shot a 6-under 66 to help Scotland take a one-stroke lead over Australia after the first round of the World Amateur Team Championship.

Walker Cup player Grant Forrest added a 68 at Iberostar Playa Paraiso to give Scotland a 10-under 134 total, with only the best two scores counting for the three-man teams. Robert MacIntyre had a 69.

The 20-year-old Syme topped the individual standings along with Poland’s Adrian Meronk. A rangekeeper at Drumoig Golf Centre in St. Andrews, Syme won the 2016 Australian Amateur.

Cameron Davis led Australia with a 67, Harrison Endycott had a 68, and U.S. Amateur champion Curtis Luck shot 69, also opening at Iberostar Playa Paraiso in the rotation with Mayakoba El Camaleon.

The two-time defending champion United States was tied for seventh at 5 under. Oklahoma’s Brad Dalke opened with a 67 at Mayakoba El Camaleon, Stanford’s Maverick McNealy had a 70, and Texas’ Scottie Scheffler a 73.