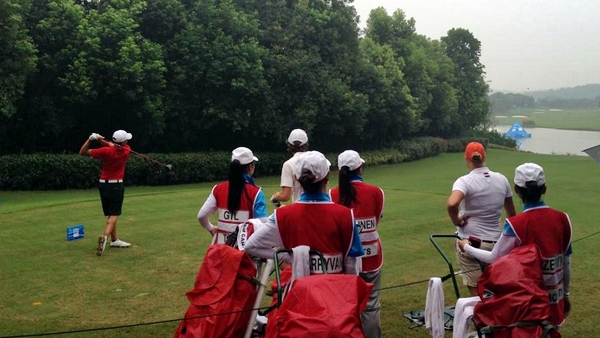 NANJING, China – The Canadian duo of Maddie Szeryk and Tony Gil combined for a 2-over 74 in Monday’s alternate shot round at the Zhongshan International Golf Club to remain tied for 17th at the Youth Olympic Games.

Szeryk, an 18-year-old dual-citizen of Canada and the U.S., and Gil, a 16-year-old Vaughan, Ont. native, struggled to move up the leaderboard with the difficulty of foursomes (also known as alternate shot) format. The pair found trouble early, carding a double-bogey on the par-5 2nd hole. They had a tough time climbing back after that, managing just one birdie that came on the par-5 11th.

This was the first official alternate shot event that Gil and Szeryk have participated in. Team Coach, Robert Ratcliffe, remains optimistic for the team to recover in tomorrow’s combined score event and to continue learning.

“I’m helping them focus on learning from the experience no matter what the result,” said Ratcliffe, also Team Canada’s Development Squad Lead Coach. “Tomorrow’s rounds are aggregate, so there will be a lot of moving on the leaderboard and we are looking forward to it.”

Having already played better-ball (69) and alternate shot (74), the team sits at 1-under par overall and are looking ahead to the final round of combined score.

The lead is currently held by Denmark’s Pinnerup Axe Pultz and Emily Kristine Pedersen, who carded matching 65s to sit at 14-under par.

Szeryk and Gil are set to tee-off in the early time slot once more, this time off the 10th tee. They are scheduled to start at 8:30 am (CST).