Canada shares lead after first round of Men’s World Amateur 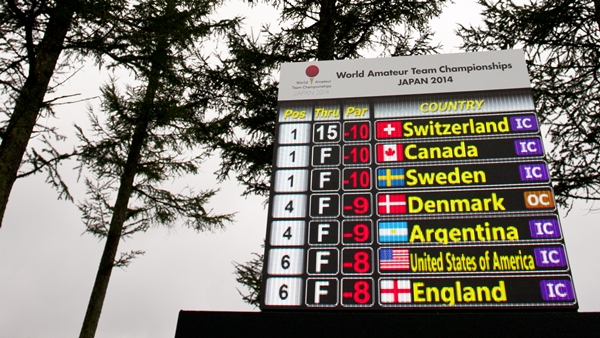 KARUIZAWA, Japan – The men’s trio of Corey Conners, Taylor Pendrith and Adam Svensson have continued the success for Canada at the World Amateur Championship, firing a 10-under 134 to share the lead with Sweden and Switzerland after Wednesday’s opening round at Karuizawa 72 Golf East.

Conners, the 2014 U.S. Amateur runner-up, carded a 6-under 66 to lead the way for the Canadian contingent. The Listowel, Ont. native posted five birdies on the front nine, boosting him to a tie for second on the individual leaderboard, one back of Sweden’s Marcus Kinhult.

“It was definitely motivating to see the ladies do so well and we want to continue the success for Canada,” said the 22-year-old. “We’re all hoping to play as well as they did and we’re off to a nice start.”

His Team Canada teammate and old roommate at Kent State, Taylor Pendrith, carded a 4-under 68.

“I drove the ball pretty well and my putting was probably the best part of my game today – I made a lot of nice putts and some 15- to 20-footers,” said the Richmond Hill, Ont. native. “Overall I’m pleased with the way I played. It was unfortunate to bogey the last two holes but I’m very happy.”

Adam Svensson, a Surrey, B.C. native, carded a non-counting 3-under 69.

“We put in some really good preparation,” said team captain, Graham Hill. “Derek Ingram, our coach, works very closely with all the guys here. I don’t think we’re surprised that we played well here today. We’re just taking it day by day and we’re happy with the start.”

Canada was one of thirty-seven teams to break par in the first round and contribute towards the 65 sub-par scores, breaking the record of 42 in 2004.

The Canadians opened on the Iriyama Course in the first round – they will alternate tomorrow by playing the Oshitate Course. They are set to tee-off at 10:35 am (JST), grouped with Malaysia and Slovakia.