Canada sits T23 through 36 at the World Amateur 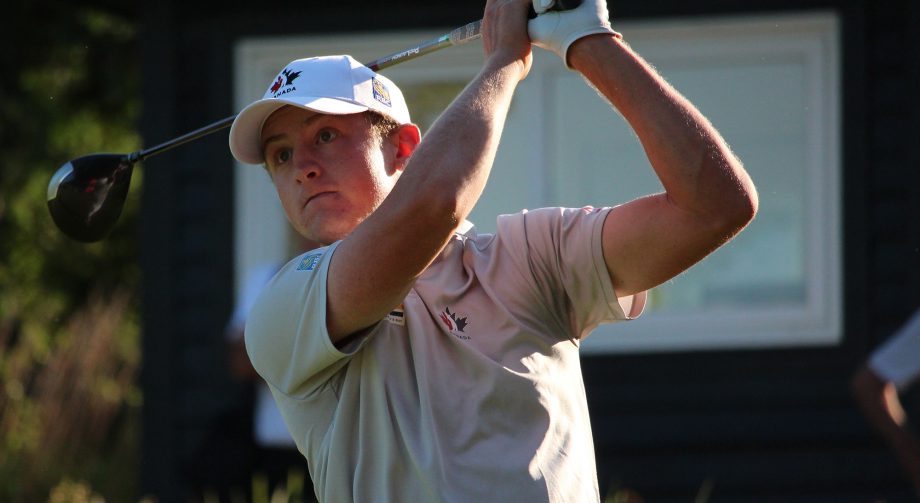 RIVIERA MAYA, Mexico – The Canadians struggled to make up any significant ground on Thursday’s second round at the 30th World Amateur Team Championship, carding a team score of 140 (-2) on the par-71, 6,771-yard/6,187-meter Mayakoba El Camaleon Golf Club to sit T23.

For the second straight day, 21-year-old Jared du Toit led the Canadian trio with the team’s lowest score. The Kimberley, B.C., product was scoring well until running into trouble on his 11th and 12th holes, where he carded a respective bogey and double-bogey. du Toit, a senior at Arizona State, finished the day at 1-under par to hold a share of 37th individually.

The second-counting score of the day came from the reigning Canadian Men’s Amateur champion, Hugo Bernard, who matched du Toit with a 1-under 70. The Mont-St-Hilaire, Que., native now stands in a tie for 52nd place. Rounding out the Canadian contingent was Elmira, Ontario’s Garrett Rank. The 29-year-old has yet to find his groove, posting a 72 (+1) to share 80th place.

Collectively, the Canucks sit at 2-under par for the tournament, and will look to make up ground in tomorrow’s third round. Rank will tee-off first for the Canadians on moving day, slated to start at 7:45 am EDT, followed by Bernard at 7:55 am EDT and du Toit at 8:05 EDT. The squad will be paired up with Netherlands and Germany.

Australia nearly matched the 36-hole scoring record and vaulted to an eight-stroke lead after the second round in the 30th World Amateur Team Championship (WATC). Harrison Endycott and Cameron Davis each fired 5-under 66s at the Mayakoba El Camaleon Golf Club.

The Australians, who began the day one stroke behind first-round leader Scotland, posted a 10-under 132 at Mayakoba. Australia’s two-round total of 19-under-par 267 is one off the WATC record established by the USA in 2012. Curtis Luck, the 2016 U.S. Amateur champion, added a non-counting even-par 71. The best two scores from each country’s three-man team are used.

“The mindset was to be as competitive as we can,” said Australian captain Matt Cutler, whose team also equaled the lowest second-round score in WATC history. “You talk about having an opportunity to win. If we play well, we have a chance to win, so that has been our focus.”

Endycott, who has won this year’s Porter Cup and was a quarterfinalist at the Australian Amateur, holed a 10-foot birdie putt on the par-4 18th to cap his team’s performance. He used an 8-iron to set up two of his six birdies at Nos. 9 and 15, but his play was propelled by a run of four consecutive birdies on his inward nine in the first round.

“That was a huge confidence booster,” Endycott said. “Yesterday things weren’t going my way early on. I just wasn’t hitting good shots, and I was struggling to get feels. Making a few good putts from good positions says you can go do this.”

Davis, who finished second in both the Asia-Pacific Amateur and Australian Amateur last year, recorded seven birdies on his scorecard for the second consecutive day. He birdied Nos. 4, 5, 6 and 7 on his outward nine and has the best 36-hole individual score at 10 under after opening with a 67 at the par-72, 6,888-yard/6,386-meter Iberostar Playa Paraiso Golf Club.

“We are full of confidence,” Endycott added. “We all believe in the three of us. As long we keep building that momentum like we are doing at the moment, it is going to be a good week.”

Maverick McNealy, who won the 2016 Mark H. McCormack Medal as the top-ranked amateur player, reeled off five consecutive birdies on his inward nine at Iberostar to advance the USA into second place at 11-under 275.

McNealy, a first-team All-American at Stanford University, and Scottie Scheffler, a junior at the University of Texas, each carded 3-under 69s. Scheffler also closed well with birdies on three of his last five holes.

“We had a nice finish with Maverick making five in a row on the back nine, and we’re very pleased,” said USA captain Paul Caruso. “There was a little bit of weather and wind at the start, but once it calmed down, we played good golf.”

The USA appeared to be fading midway through the round in its quest to win its third consecutive WATC championship. McNealy, who was the Pac-12 Conference Player of the Year for a second time, started on No. 10 and bogeyed three of his opening four holes.

“I got off to an atrocious start, so Brad (Dalke) came over and gave me a little pep-talk,” McNealy said.  “I feel like I played really solidly after those first four holes. I’m glad I managed to hold the round together.”

Switzerland moved into third at 10-under 276 with an array of closing birdies and an eagle at Mayakoba. Jeremy Freiburghaus, who shot a 3-under 68, birdied four of the last six holes. Mathias Eggenberger, who helped Team Europe win this year’s Palmer Cup, shot a 69. His round was highlighted by a 32-foot eagle putt at the par-5 seventh.

“We are more than pleased,” said Toni Matti, who is serving as Switzerland’s captain for a sixth time. “Golf is never ending. It’s always until the finish that you can make some birdies and some eagles.”

Poland counted a 2-under 69 from Adrian Meronk and a 1-under 70 from Mateuz Gradecki, positioning them in fourth at 9-under 277. Meronk, who was an All-America selection at East Tennessee State University in 2015-16, took advantage of the par 5s on the inward nine at Mayakoba. He had an easy up-and-down for birdie at No. 13 and made a 15-footer for another birdie at No. 15.

“I am kind of use to it because I was a leader in college as well,” said Meronk about his role as a playing captain. “It’s been always good for me, and I hope we finish strong.”

Scotland was one stroke behind at 8-under 278. The first-round leader struggled to a 2-over 144. Robert MacIntyre, the runner-up at this year’s Amateur Championship at Royal Porthcawl, had an even-par 71, while Grant Forrest added a 73. Forrest’s topsy-turvy round included a triple-bogey at Mayakoba’s par-4 first hole, his 10th hole, and a 60-foot eagle putt from the fringe at No. 5.

“It was one of those days where it couldn’t have gone much worse,” Forrest said. “It’s just what happens sometimes, and you have a tough time when the putts don’t go in.”

Austria and Ireland are tied for sixth at 7-under 279. Austria’s Markus Maukner and Michael Ludwig each carded 2-under 70s at Iberostar. Maukner improved from his first-round 80 by making five birdies against three bogeys. Jack Hume, of Ireland, fought back from a two-stroke penalty to post a 2-under 70, and teammate Paul McBride had a 73.

“There is good spirit in the team,” said Austrian captain Tobias Schmied. “You saw that today when a player who didn’t score too well yesterday improved his performance today for the good of the team.”

Spain, which was tied for third after the first round, had difficulties making the transition to the Mayakoba El Camaleon course. The team’s second-round score of 3-over 145 left them at 281 in a tie for 12th. Manuel Elvira, who is a junior at the University of Central Florida, shot a 71 and Ivan Cantero had a 74.

“This is a PGA Tour golf course,” said Elvira about a venue which will host the OHL Classic at Mayakoba in November. “It was a real tight golf course, and the greens are more difficult. It’s tougher to score on this course than the other one.”

Joshua Ho, of Singapore, produced the low round of the championship with a 7-under 65 at Iberostar. Ho, who was 11 strokes better than his first-day score, and Gregory Foo’s 70 helped improve their team’s standing 26 places and into a tie for 12th at 281.