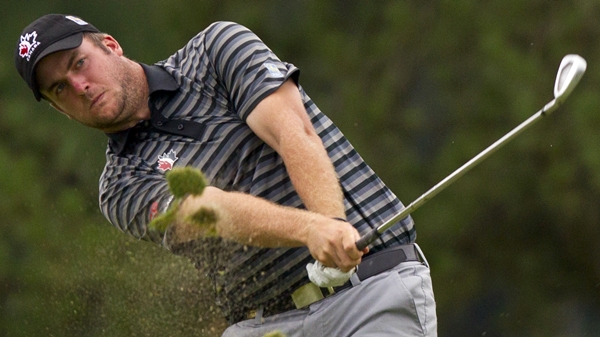 KARUIZAWA, Japan – Canada combined for a 6-under 136 in Thursday’s second round to slip to fifth place (-16) at the men’s World Amateur Team Championship at Karuizawa 72 Golf East.

The Canadians held the lead at 19-under par through 15 holes but lost four strokes in the last three holes to sit alone in fifth. Sweden, Switzerland and the U.S. share a tie for second, while Argentina holds the outright lead at 18-under.

“Both days, we gave a few shots back on the way in,” said Canadian captain Graham Hill. “It’s something we will talk about tonight. There are lots of low scores and it’s a bunched up leaderboard. While it’s not exactly what we wanted, 6-under is still a good score and we are still right there.”

The Canadian trio was led by Richmond Hill, Ont. native and Team Canada member, Taylor Pendrith. The 23-year-old carded seven birdies on the day en route to a 4-under 67 on the Oshitate Course. His teammate, and Co-Mid-American Conference player of the year, Corey Conners, carded a 2-under 69. The Listowel, Ont. native sits at 8-under in a tie for 12th with Pendrith on the individual leaderboard.

Adam Svensson, a native of Surrey, B.C., matched Conners with a 69 as the team’s second lowest counting score for the day. The 2014 Jack Nicklaus award winner sits at 5-under individually (69-69).

The Canadian contingent is back on the Iriyama Course for Friday’s third round. They will tee-off starting at 11:05 a.m. (JST), grouped with Sweden and Spain.