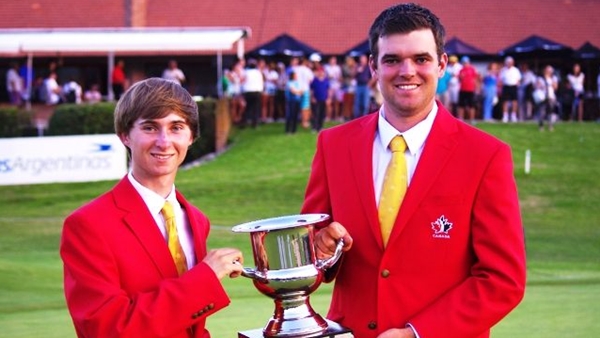 The two-man team of Austin Connelly and Corey Conners played solid golf in the final round to add to an already insurmountable lead heading into the day.

Connelly, a dual citizen who resides in Nova Scotia and Texas, shot a 2-under par 69 on Sunday, while Conners, a 22-year old native of Listowel, Ont., carded a 68.

“It feels great to win this championship, we played at high level and really enjoyed ourselves,” said Connelly.  “The key for me this week was to stay calm in every round, especially because the course conditions became more difficult, especially on the green. Luckily I was able to hole many putts and that’s what led me to make good scores.”

Conners was also ecstatic to earn the win.

“I’m very happy and proud to win this major championship for the first time for our country,” said Conners, who finished runner-up at the 2014 U.S. Amateur. Today we were reassured by the difference we had … I hit all the greens in regulation and I am satisfied with the work I did with Austin, who played outstanding.”

Finishing behind Spain in third place was Chile, whose 577 total strokes marked the country’s best finish ever at the tournament.