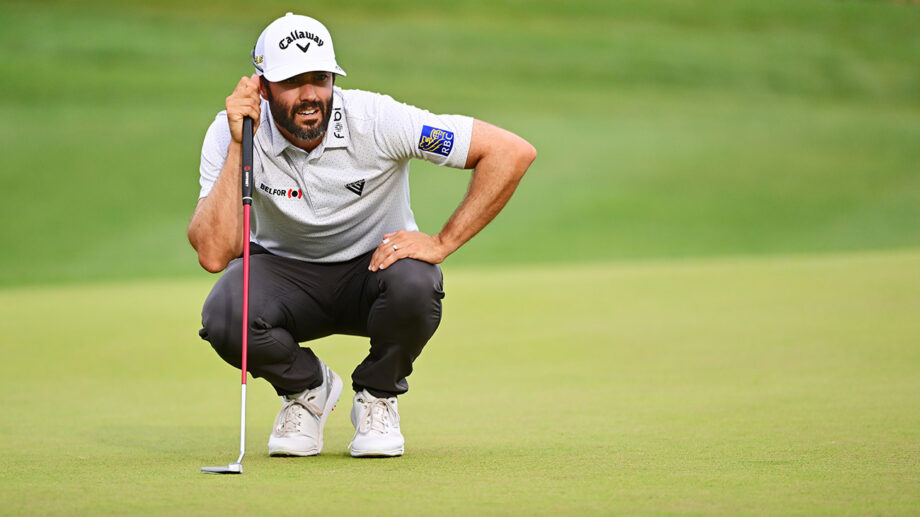 PALM HARBOR, FLORIDA - MARCH 19: Adam Hadwin of Canada lines up a putt on the 18th green during the third round of the Valspar Championship on the Copperhead Course at Innisbrook Resort and Golf Club on March 19, 2022 in Palm Harbor, Florida. (Photo by Julio Aguilar/Getty Images)
John Chidley-Hill/ Canadian Press

Adam Hadwin, a lifelong Blue Jays fan, was floored when he was introduced to the honorary observers that would be following his pairing in the final round of the Valspar Championship on Sunday: Toronto relievers Ryan Borucki and Jordan Romano.

“There was some guys standing on the tee and I just kind of went up and I didn’t recognize them, I had no idea who they were,” said Hadwin, who threw out the first pitch before a Jays game at Rogers Centre in July 2018.

“Ryan introduced himself and I kind of had to do like a triple take and I’m like wait a second, I know that name!”

Borucki, who said he watches the PGA Tour almost every weekend, said it was a really cool moment for him and Romano, who is from Markham, Ont.

“Right when I introduced myself, I said, ‘Hey, my name is Ryan Borucki. This is Jordan Romano,’ and Adam’s like, ‘Wait, really? Like no way,”’ said Borucki. “It was just a cool feeling because I idolize PGA golfers and just that he knew who me and Jordan were.

“I remember he walked away and me and Jordan were like ‘that was really cool.”’

When the two pitchers were told they had the option of trailing Hadwin for the day, the choice was obvious.

“We’ve got to go with Hadwin. Obviously, Canadian guy, we know that he’s a huge Blue Jays fan. We have to support our guy,” said Borucki. “The minute we met him, he’s such a good guy, so friendly.

“He was so good to us while we were out there and it was really a pleasure being able to follow him the entire round.”

Hadwin, from Abbotsford, B.C., started the fourth day of the event in contention but shot a 1-over 72 in the final round to tie for seventh. He finished at 12 under overall five shots back of eventual winner Sam Burns, who beat Davis Riley in a playoff.

“I hope they enjoyed the day,” said Hadwin of the Blue Jays pitchers. “I wish I had played a little bit better in front of them but it was amazing having a couple guys from the team that I root for support me during that final round.”

Borucki, who had only attended one PGA Tour event in person before, loved his time on the course with Hadwin.

“Being able to walk inside the ropes is just an experience in itself.” said Borucki. “It was definitely one of the best days of my life as a baseball player, and as a PGA Tour fan. Oh, I was in heaven out there.”

Although he was disappointed in his final result, it was Hadwin’s second consecutive top-10 finish. He tied for ninth at the Players’ Championship the previous week. The two strong showings elevated him up to 44th in the FedEx Cup rankings on Monday.

“I was able to do that the last couple of weeks through some golf courses that aren’t exactly easy in some situations.”