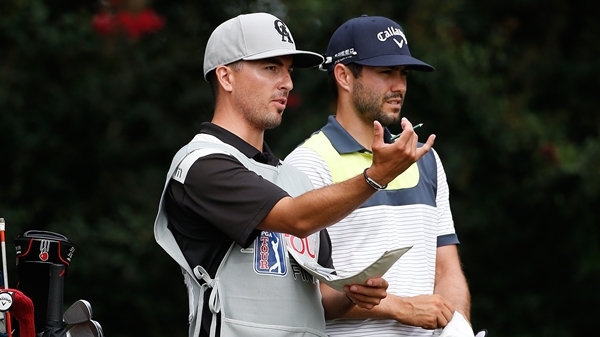 DAVIDSON, N.C. – Canada’s Adam Hadwin birdied the first six holes on the back nine and shot a course-record 9-under 63 on Thursday to take the first-round lead in the Chiquita Classic, the second of four events in the Web.com Tour Finals.

The 26-year-old Hadwin, the Chile Classic winner in March, made putts from 10-16 feet during the birdie run that ended with a two-putt par from 35 feet on the par-4 16th.

“My record was five before today,” Hadwin said. “I think I’ve done it a couple of times playing for fun and stuff. At no point during that stretch did it cross my mind. I was just disappointed I left the seventh birdie putt short on 16 to keep it going. Par seems disappointing after six in a row.”

Hadwin finished fourth on the Web.com Tour’s regular-season money list to earn one of 25 PGA Tour cards. Those 25 players are competing against each other for PGA Tour priority, with regular-season earnings counting in their totals and the final leader getting a spot in The Players Championship.

“I’m going to the tour next year and I’ve got no pressure on me,” he said. “I’m just playing for seeding. I’m going to go out there, stay aggressive, stick to my game plan and whatever happens, happens.”

The other players in the series – Nos. 26-75 from the Web.com Tour money list and Nos. 126-200 in the PGA Tour’s FedEx Cup standings – are fighting for another 25 cards based on their earnings in the four tournaments.

“I think I changed clubs almost weekly this year,” Peterson said. “It was bad. I switched up caddies, instructors, clubs – everything. It got out of hand. I got caught up in trying to hit fades and play like this guy or swing like that guy. I just got lost of what made me me.”

He retooled his entire golf bag two weeks ago – all 14 clubs.

“I switched back to everything that I had last year,” Peterson said. “They weren’t necessarily the exact clubs, but they were still the same. It’s amazing how the look of something when you’re looking down on it can change your outlook.”

Nick Taylor of Abbotsford, B.C. needs to continue to play well if he hopes to earn one of the final 25 PGA Tour cards being offered via the Web.com Tour and he did just that Thursday, carding an opening-round 67.

Bud Cauley, a one-stroke winner over Knost last week in the series-opening Hotel Fitness Championship in Fort Wayne, Indiana, opened with a 71.

Five players were unable to finish the round after play was delayed for 70 minutes in the afternoon.