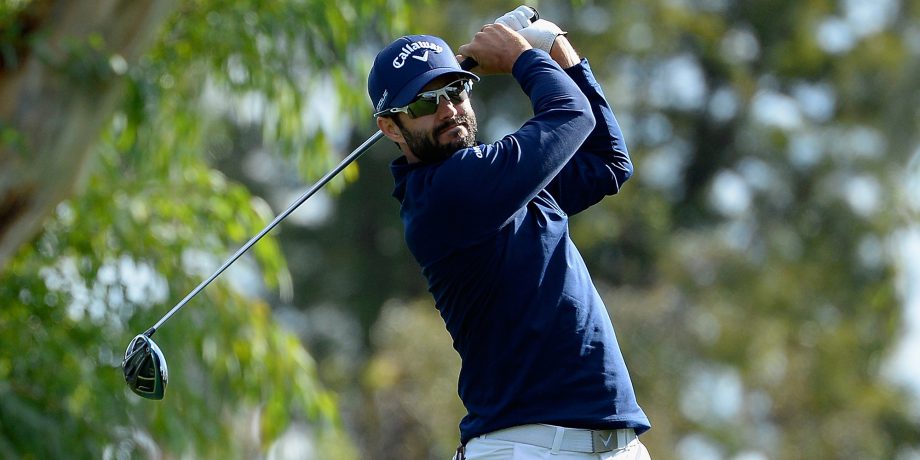 LA QUINTA, Calif. — Austin Cook hit a hybrid into the fairway bunker on the par-4 18th on a breezy Saturday afternoon at La Quinta Country Club, then chunked a wedge and raced a chip 20 feet past the hole.

Kip Henley, the longtime PGA Tour caddie who guided Cook to a breakthrough victory at Sea Island in November, stepped in to give the 26-year-old former Arkansas star a quick pep talk.

“Kip said, ‘Let’s finish this like we did on the first day at the Nicklaus Course.’ We made a big par putt on 18 there and he said, ‘Let’s just do the same thing. Let’s get this line right and if you get the line right it’s going in.”’

It did , giving Cook an 8-under 64 and a one-stroke lead in the CareerBuilder Challenge going into the final round on the Stadium Course at PGA West. Fellow former Razorback Andrew Landry and Martin Piller were tied for second, and Jon Rahm and Scott Piercy were a another stroke back after a tricky day in wind that didn’t get close to the predicted gusts of 40 mph.

Cook played the final six holes on the front nine in 6 under with an eagle and four birdies.

“Starting on my fourth hole, I was able to make a birdie and kind of get the ball rolling and it never really stopped rolling,” Cook said. “Kip and I were doing really good at seeing the line on the greens.”

“I think that tonight the nerves, the butterflies, all that will kind of be a little less,” Cook said. “I’ve been in the situation before and I was able to finish the job on Sunday. I think it would be a little different if I didn’t play like I did on Sunday at Sea Island.”

He’s making his first start in the event.

“I came in from Hawaii on Monday, so I only had two days to prepare for three courses,” Cook said.

“Piller’s a good guy and we have played a lot together and same with Cookie,” said Landry, the only player without a bogey after 54 holes. “Hope the Hogs are going to come out on top.”

“A little bit of a survival day,” Rahm said.

The wind was more of a factor on the more exposed and tighter Stadium Course.

“The course is firming up,” Rahm said. “I know if we have similar wind to today, if we shoot something under par, you’ll be way up there contesting it over the last few holes.”

Piercy had a 66 at the Stadium.

“I controlled my ball really well today,” he said.

Adam Hadwin of Abbotsford, B.C., had a 67 at La Quinta a year after shooting a third-round 59 on the course. The Canadian was 16 under along with Grayson Murray and Brandon Harkins. Murray had a 67 on the Nicklaus Course, and Harkins shot 68 at the Stadium.

Phil Mickelson missed the cut in his first tournament of the year for the second time in his career, shooting a 74 on the Stadium to finish at 4 under — four strokes from a Sunday tee time. The 47-year-old Hall of Famer was playing for the first time since late October. He also missed the cut in the Phoenix Open in his 2009 opener.

Charlie Reiter, the Palm Desert High School senior playing on the first sponsor exemption the event has given to an amateur, also missed the cut. He had three early straight double bogeys in a 77 on the Stadium that left him 1 over.

John Daly had an 80 at La Quinta. He opened with a triple bogey and had six bogeys — four in a row to start his second nine — and only one birdie. The 51-year-old Daly opened with a 69 on the Nicklaus layout and had a 71 on Friday at the Stadium.