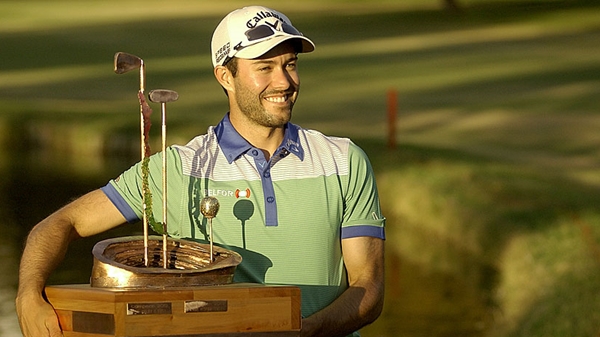 SANTIAGO, Chile – Adam Hadwin fired a 3-under 69 Sunday at the Chile Classic to claim his first victory on the Web.com Tour.

The Abbotsford, B.C. native went back and forth with Australia’s Alistair Presnell for the outright lead before birdieing the par-5 18th to finish atop the leaderboard at 16-under par.

Hadwin held a share of the lead heading into the final round after firing rounds of 67-69-67. His final round 69 earned him the $117,000 first place prize cheque and also moved the two-time PGA Tour Canada winner into the No. 1 spot on the Web.com Tour’s money list.

“I don’t know what to say,” Hadwin said. I really don’t know what to feel, what to think,” he said. “It’s amazing. I battled all day and to finish birdie-birdie and make the putts I did on the last two holes gives me so much confidence. I couldn’t be happier.”

“I heard roars, but I didn’t know what happened,” Hadwin said. “I knew it was going to be close. I said to my caddie on 17 tee that, `If I make two birdies, they can’t catch us.'”

Hadwin got up-and-down from a greenside bunker on the 308-yard, par-4 17th to tie Presnell for the lead. From 230 yards on the 18th, he hit a 4-iron that missed the green, then chipped to 4 feet and made the putt.

“It was an awkward number. I wanted to hit 5-iron and didn’t think I could clear the water if I missed it a little, so I went with 4,” said Hadwin, a former University of Louisville player. “I guess I gave up on it a little and luckily it cleared the water. It was a fairly easy chip across the green and was able to get up and down for the victory.”

Hadwin became the 13th Canadian-born player to win on the Web.com Tour and the first since Chris Baryla in the 2009 Chattanoonga Classic, a span of 111 tournaments.

Following the win, Hadwin also took to Twitter with excitement.

What an amazing day! Cant thank everyone enough. This win is for everyone that has ever been a part of life. Wouldnt be here without you!

Going to enjoy this one for a night with my Canadian brethren and then its back to work for next week in brazil. Mom, dad, kyle love you!

Hadwin wasn’t the only Canadian in Chile to join in on the online celebrations. Mackenzie Hughes of Dundas, Ont. finished tied for 70th at 1-under. He tweeted the following pic Sunday evening.

South Korea’s Sung Joon Park, Sweden’s Henrik Norlander and American Kyle Reifers tied for third at 13 under. Park shot a 66, Norlander had a 69, and Reifers a 71.

Toronto’s Albin Choi claimed his first top-25 finish of the season after a final round 5-under 67. Choi finished in a tie for 23rd at 9-under par, while Roger Sloan of Merritt, B.C. closed with a 1-under 71 to share 34th place.

For complete results from the Chile Classic, click here.