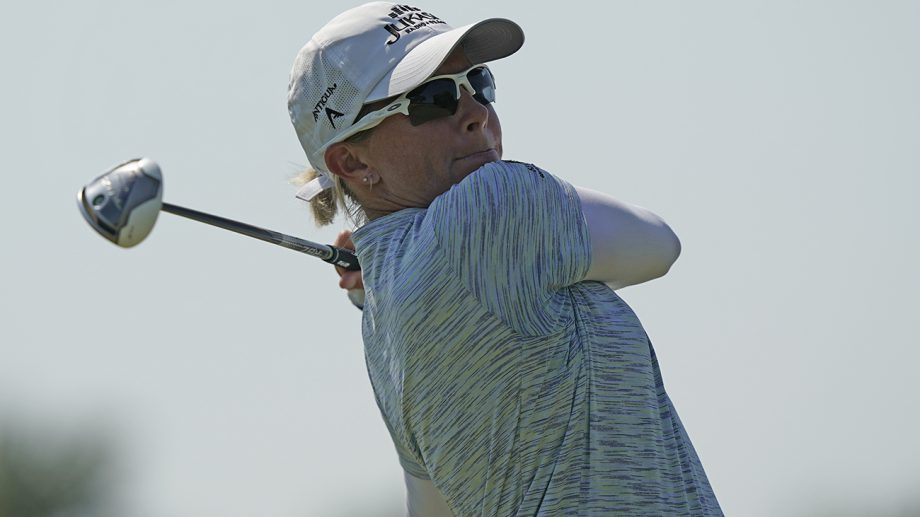 GREENSBORO, Ga. — Ally McDonald secured a one-stroke lead after shooting a 4-under 68 on Friday in the LPGA Drive On Championship-Lake Reynolds Oconee.

“I’m trying to just execute and stick to my game plan,” McDonald said. “I think it’s really easy as a person who has never won to get ahead of yourself. We all really, really want to win. That’s why we do this. That’s why we compete — to put yourself in contention as much as we can.”

The 27-year-old from Mississippi made five straight birdies in the middle of the round, then gave back two strokes with bogeys on the par-4 fifth and par-5 sixth.

“I was just thinking like, `I don’t want to discredit my round just because I played a couple bad holes towards the end of the day,”’ McDonald said. “I put myself in a great position to hit some really good shots and it was really solid for, I guess, would’ve been 13 holes. ”

She had a 10-under 134 total in the first-year event on the Great Waters Course.

Hamilton, Ontario’s Alena Sharp is tied for 12th going into the weekend after shooting a 5-under 69.

Calgary’s Jaclyn Lee, a Golf Canada Young Pro Squad member who made her professional debut in 2019, shot a 73 and missed the cut at 9 over par.

Danielle Kang was tied for second with Bianca Pagdanganan of the Philippines in the event added to the schedule because of the COVID-19 pandemic that shut down women’s golf for five months. The tour returned with another Drive On tournament in Toledo, Ohio, in late July, with Kang winning that event and again the following week in Sylvania, Ohio.

Kang, tied for the first-round lead with Jennifer Song after a 65, birdied the par-5 18th for a 70. Kang leads the Race to CME Globe and, at No. 5 in the world, is the top-ranked player in the field,

“I think I’m in pretty good position for the weekend,” Kang said. “Getting to know the golf course a little bit better every day. Today played differently than yesterday because teed off early and golf course played longer. The greens were a little bit more — there is dew so it was a little slower. Towards the end started drying up, so I had to adjust.”

Pagdanganan shot a 67 — also closing with a birdie on 18. A member of Arizona’s 2018 NCAA championship team after starting her college career at Gonzaga, she’s making her sixth LPGA Tour start of the year and seventh overall.

“I feel really relaxed out there,” Pagdanganan said. “I’m really enjoying this whole environment, With the course being by the lake, it’s really beautiful.”

Ariya Jutanugarn was 8 under after a 67. Winless in more than two years, the 10-time LPGA Tour champion opened bogey-double bogey on Nos. 10 and 11, then rallied with an eagle and four birdies.

“To be honest, after first two holes, I feel like make cut going to be good enough for me this week.” Jutanugarn said. “It’s just so much fun to be able to come back and make some birdies.”

“On that hole, I feel like I have good commitment with every shot I hit,” Jutanugarn said.

Katherine Kirk birdied four of the last six holes in the afternoon for a 65 to get to 7 under. European Solheim Cup teammates Mel Reid (68) and Pernilla Lindberg (69) also were 7 under. Reid, won her first LPGA Tour title three weeks ago in New Jersey.

“It’s just about being patient, being sensible when you can and you get the green flag to go for the pins and when not to,” Reid said.

Song had four bogeys and a closing double bogey in a 75. She was six strokes back.

Jessica Korda rebounded from a first-round 74 and opening bogey to shoot 67 and get to 3 under. She eagled No. 6.

Juli Inkster missed the cut with rounds of 77 and 72. The 60-year-old Hall of Famer was making her third start of the year.