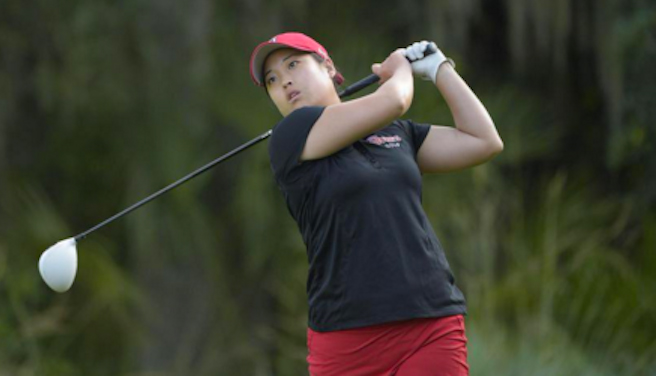 RANCHO MIRAGE, Calif. – Sarah Schmelzel (Phoenix, Ariz.) posted another 5-under, 67 on the Gary Player Course on Friday to grab the 36-hole lead at Stage I of the LPGA Qualifying Tournament at 10-under, 134. She is three shots clear of Savannah Vilaubi (Downey, Calif.) and Daniela Darquea (Quito, Ecuador).

The low 90 and ties, currently at 2-over, 146, advance to Stage II after final-round play on Sunday.

Schmelzel, 22, also carded a 67 on day one on the Arnold Palmer Course. Through two days, she has 11 birdies, an eagle and three bogeys, which all came on day one.

“I was hitting it close early, but wasn’t making the putts so I stayed patient,” said Schmelzel. “Then I made birdie on three and six and made an eagle on seven. I really believe in the preparation I put in for this week and I knew this was possible.”

Schmelzel’s eagle putt on hole seven came from almost 50-feet. She wasn’t expecting to be on the green in two, but ripped a 3-wood to put herself in position to roll in a long putt.

In her first LPGA Qualifying Tournament, Schmelzel said that not shying away from the pressure has been key.

“I’m embracing the pressure and the stress that everyone talks about,” said Schmelzel. “I’m so grateful to be out here playing and I’m just trying to stay patient.”

Schmelzel was a Golfweek Honorable Mention All-American as a senior at South Carolina. She posted three top 10 finishes in her final year and closed her career with a scoring average of 74.25, fourth all-time at South Carolina.

“Every year brought a new challenge, I went through injuries and I went through highs of winning regionals and lows,” said Schmelzel. “Now that I’ve turned pro, I can see how dealing with adversity in college has helped me. I was forced to mature so quickly in order to be successful.”

The adversity in college came right away when she dealt with being on the other side of the country from family and then during her junior year she missed the first half with an overuse shoulder injury.

Schmelzel was a competitive gymnast growing up and to the surprise of her parents; she decided to quit in seventh grade to focus on golf. With her dad, Dennis, on the bag this week, she is in position to move a stage closer to her dream.

“The LPGA is a big goal of mine, but I know there is a lot of golf left,” said Schmelzel. “I’d loved to win a major championship some day.”

Canada’s Anna Kim of Toronto sits as the highest Canadian on the leaderboard through 36 holes at Stage I of LPGA Qualifying School at 6-under par. The recent St. John’s University graduate and BIG EAST Golfer of the Year carded rounds of 70-68 to land in a tie for fourth heading into Saturday. Fellow Canadian Taylor Kim of Surrey, B.C., struggled on Friday with a 75 (+3) to slip outside the Top-10 into a tie for 20th.

Saskatoon’s Anna Young sits T46 at even-par, while Aram Choi of Surrey, B.C., holds a share of 62nd place at 1-over.