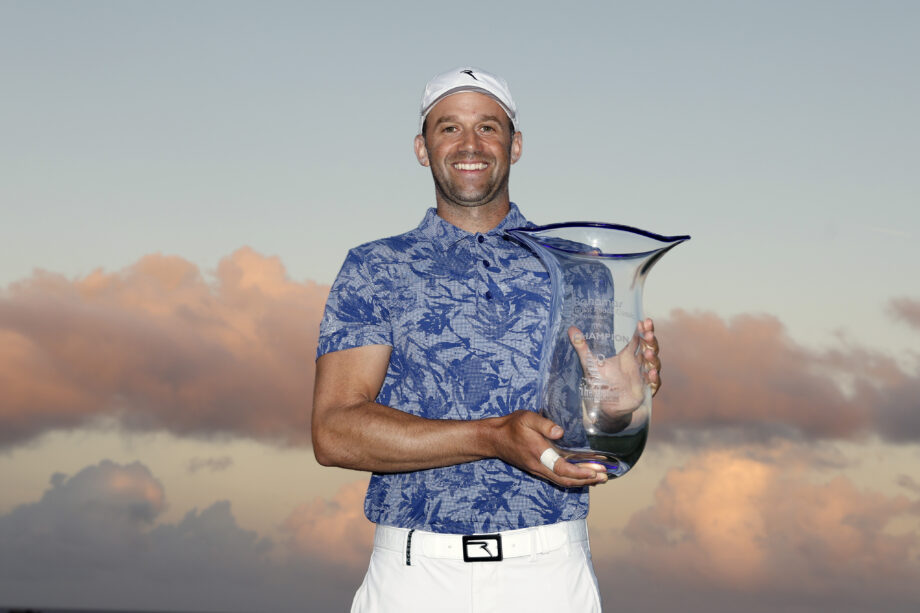 GREAT ABACO, The Bahamas – Ben Silverman shot 118 in his first Canadian Junior Golf Association tournament, an unsurprising result given he was 16 years old, relatively new to the game, and still thought of himself as a hockey player rather than an aspiring professional golfer. As Silverman lined up a playoff-forcing 3-footer for double bogey on the 72nd hole of The Bahamas Great Abaco Classic at The Abaco Club Wednesday afternoon, surrendering the last two shots of what was at one point an eight-stroke lead, it probably felt like a putt for 118.

“I got way ahead of myself in my head, thinking I already won the tournament,” Silverman said.

Silverman made the putt, signed for a 2-under 70 and caught a shuttle ride back up the fairway of the par-5 18th, where he hit shots into two different penalty areas no more than 10 minutes prior.

Cody Blick joined Silverman on the 18th tee this time around. Blick could hardly believe he had a chance at his first Korn Ferry Tour win. Just under a half hour ago, Blick figured a closing birdie for a round of 6-under 66 simply added a little extra flavor to the night’s dinner, as it took him to 15-under par, three strokes clear of a four-way tie for third place and more than enough for back-to-back runner-up finishes. Impressive stuff for someone who was without a single top-25 in 26 career Korn Ferry Tour starts preceding the 2023 season. Yes, dinner would taste phenomenal.

This trip down the 18th fairway, though, it was Blick who put two shots into the same penalty areas Silverman found in regulation, first on the lay up, then the approach. Silverman nearly found the rocky native area up the right side of No. 18 with his lay up as well, but a fortunate bounce off the rocks put him in the fairway and with a routine wedge shot into the two-tiered green.

Silverman left his approach on the front half of the green and two-putted up the slope to his second career Korn Ferry Tour victory.

“It’s amazing. A little overwhelming,” Silverman said. “Honestly almost broke down in the fairway in regulation. It worked out in the end. I’ll learn a lot of lessons from that. Once I knew it was a playoff, Tom Whitney said in the scoring room, ‘No matter what, it was a great week.’ I just wanted to be more committed on my shots the second go round and just give it my all.”

Silverman’s journey to PGA TOUR membership and a second Korn Ferry Tour victory was as unlikely as the fact he lost an eight-stroke lead only to come back and win the tournament in a playoff.

A native of Thornhill, Ont., Silverman played competitive hockey until around the time he turned 16 and still measured 5 feet, 10 inches. Too small and too worried about getting hurt. There were brief stints in volleyball and baseball, even ultimate frisbee. Silverman eventually found himself at a golf camp during a family trip and stuck with the game.

He eventually entered a tournament and shot 118. He graduated high school with a handicap index of 12. He made his way to a Johnson & Wales University satellite campus in Miami, which offered a handful of academic tracks but was known for its culinary program. He walked on to the golf team there and, two years later, did the same at Florida Atlantic University. He turned professional in 2010 and toiled on the mini-tours for four years until he earned PGA TOUR Canada membership. By 2016, he earned Korn Ferry Tour membership, but he missed 11 of 16 cuts as a rookie and yet again found himself without status.

At Final Stage of the 2016 Korn Ferry Tour Qualifying Tournament, things finally turned around. A T6 there ensured Silverman had nearly half a season before he was subject to reshuffles in 2017.

A run of four consecutive top-10s in July and August, highlighted by a victory at the Price Cutter Charity Championship presented by Dr Pepper, earned him a PGA TOUR card.

Silverman spent two seasons on TOUR and struggled through the 46-event 2020-21 Korn Ferry Tour season, finishing 115th on the points list. Playing from the Past Champion 5-10 Years category in 2022, Silverman made just seven starts as he played Monday qualifiers and found himself at the back end of the Korn Ferry Tour’s priority ranking.

Last October, Silverman missed the cut by three strokes at Second Stage of the 2022 Korn Ferry Tour Qualifying Tournament, setting him up for another year of chasing Monday qualifiers and hoping for sponsor exemptions in the 5-10 category. Around Thanksgiving, Silverman got a call from folks at The Bahamas Great Abaco Classic at The Abaco Club, the second event of the 2023 Korn Ferry Tour season. The tournament awarded him a sponsor exemption.

As the sun set behind the 18th green at The Abaco Club Wednesday night, Silverman became the first sponsor exemption to win a Korn Ferry Tour event since Martin Trainer won the 2018 El Bosque Mexico Championship. And without the help of a tournament volunteer, it may never have happened.

“I had a great start to the morning,” Silverman said. “But I had some butterflies, so I was doing some meditations to kind of calm down. I guess I went longer than I thought. I was looking at my phone… I’ll catch the 8:30 (a.m.) shuttle, no big deal. I get there, and there’s no 8:30 shuttle.”

Silverman negotiated a deal with a shuttle driver, a local resident and tournament volunteer named Victor. The two were on the road and still on Silverman’s intended schedule. Victor asked where Silverman stood in the tournament.

“Leading,” said Silverman, who carried a two-stroke lead into the final round. “He smacked the steering wheel like, ‘Let’s go!’”

Victor watched from the hospitality tent behind the 18th green as the wild scene (did we mention heavy rain showers appeared seemingly out of nowhere, soaked Silverman and the rest of the final group, and left behind a double rainbow?) unfolded along the shores of The Abaco Club. The two shared a lighthearted moment and a celebratory drink at the end of it all. Neither of them would be driving anywhere on this night.

Guess that explains Silverman’s fortunate bounce in the playoff.

“I had no idea, but that’s unbelievable,” Silverman said. “You can guarantee I’m going to bring my wife, friends, sponsors, we’re definitely coming back for a vacation.”

Silverman won’t need an exemption or shuttle schedule for the trip. Surely a new friend will greet him at the airport.