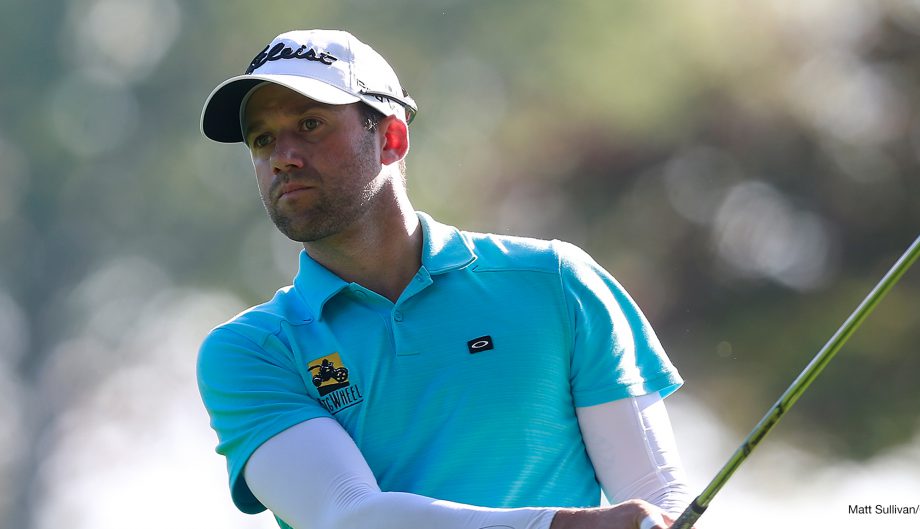 ATLANTIC BEACH, Fla. – Sam Saunders, Arnold Palmer’s grandson, shot a 12-under 59 on his home course Thursday in the first round of the Web.com Tour Championship.

Saunders birdied his final six holes at Atlantic Beach Country Club – the Jacksonville-area club where he became a member this year – for the seventh sub-60 round in Web.com Tour history.

With wife Kelly and 8-year-old son Cohen looking on, Saunders made an 18-foot birdie putt on the par-3 eighth and closed with a 10-footer on the par-4 ninth.

“It was dead centre. I saw it going in from a few feet out,” he said about the final putt.

“Honestly, I was excited because my wife and my son, Cohen, who is really getting into golf, got to watch,” Saunders said. “He’s only watched me play three full rounds of golf probably. He’s watched me fail in golf a lot, which is good, that’s a good lesson for him. For my wife, Kelly, to be there; she’s watched the ups and downs of this whole deal. I’m really glad that they got to be out there and watch me do that.”

On the par-3 fifth, the 30-year-old former Clemson player holed a 40-footer from well over the green with a shaved bank and pond looming beyond the hole.

“You’re dead. You’ve got no shot there,” Saunders said. “I putted it up the hill and it was going Mach 1, it would’ve been 30 feet past the hole and it hit dead centre.”I was just hoping for it to hit the pin. When I saw it was about 2 feet away, my heart rate went down thinking I was at least going to hit the pin. Then it when it went in I was embarrassed because it was a horrible shot, but you need to get some luck sometimes.“

Saunders is trying to regain his PGA Tour card in the four-event Web.com Tour Finals after finishing 129th in the FedEx Cup standings. He entered the week 24th in the race for 25 PGA Tour cards with $27,900 in the first three events. He tied for 11th in the Nationwide Children’s Hospital Championship, tied for 40th in the Albertsons Boise Open and missed the cut in the DAP Championship.

“I’ve been pretty tired in these Web.com Tour Finals, so it was nice to get home and get some rest and not over-practice coming in,” Saunders said. “But, on Tuesday I had a really good warm-up session and was able to figure things out. It comes back to putting, and I made everything today. That’s how you go low.”

Saunders was paired with fellow Atlantic Beach member Steve Wheatcroft, who had a 62 for a share of second place with Matt Atkins.

“It was a good time out there and it was a real special day, certainly memorable. I played with my buddy Steve Wheatcroft and we kind of fed off each other,” Saunders said. “Honestly, it just felt like a regular day at home playing our little money game and I got into a good rhythm. It was a blast.”

Wheatcroft entered the week 23rd with $29,025 after finishing 179th in the FedEx Cup standings.

Duncan came into the tournament 13th with $43,158, more than enough to secure a card. Atkins and Silverman have already earned PGA Tour cards as top-25 finishers on the Web.com Tour’s regular-season money list. They are trying to improve their status.