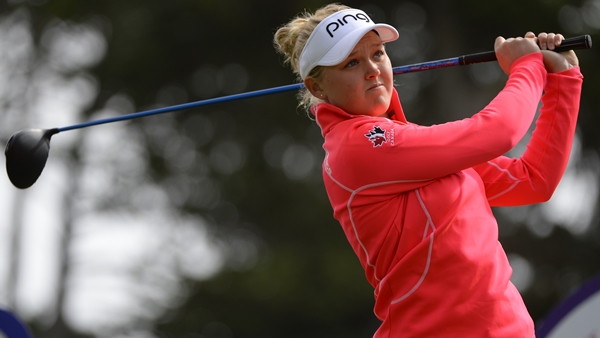 DALY CITY, Calif. – Brooke Henderson fiddles with her earrings between shots, purses her lips and anxiously watches each shot, then politely responds and makes eye contact when someone in the gallery engages her with a compliment.

Henderson is the new 17-year-old with serious swagger in women’s golf.

She shot a tournament-record 7-under 65 to take the lead halfway through the second round of the Swinging Skirts LPGA Classic on Friday.

That round put her at 9 under at Lake Merced Golf Club, where world No. 1 and defending champion Lydia Ko shot an even-par 72 to remain 5 under after taking the first-round lead Thursday. There were still afternoon rounds to play Friday, including by local favorite Juli Inkster after her opening 68.

Na Yeon Choi was two strokes back at after a 68. The 27-year-old South Korean eagled the par-5, 475-yard 14th and had three birdies on her front nine.

Yueer Cindy Feng of China stood in third place at 6 under.

As Ko celebrated her 18th birthday, she cleared the way for a new teen star to shine.

“I think I’m ready. Yeah, 17 is young,” Henderson said. “As you’ve seen with Lydia Ko and Lexi Thompson and even Jessica Korda, there are a lot of great names that have been able to do it. I’m hoping that I’m one of them.”

The long-driving Henderson eagled the 14th, hitting a 3-wood approach and making a 15-foot putt. She also had six birdies.

Henderson regularly hears how she is fearless and goes for it on shots when others might be more conservative, and that approach sure worked for her in the tricky conditions at Lake Merced.

Not that she has necessarily noticed any extra hype.

Caddie Bunk Lee insists they didn’t even know she had jumped to the top of the leaderboard in just her 10th career LPGA Tour event. Though Henderson grabbed a few glances at the leaderboard “here and there.”

“I was able to stay in a rhythm today,” Henderson said. “I got into it early, and I was able stay there all day, which was nice.”

She and her older sister, Brittany, tied for second place in last month’s Florida’s Natural Charity Classic, a Symetra Tour event that earned them each $10,000-plus paydays.

In many ways, Henderson – a member of Team Canada’s Young Pro Squad – appears to be a veteran unfazed by golf’s big stage.

“She’s far above most 17 year olds as far as maturity is concerned,” Lee said. “She’s very calm, she’s very patient, her thought process is very clear. Her ability to focus is astounding. … It’s an absolute joy to be on this bag.”

While she wasn’t particularly happy with her golf, Ko was serenaded with “Happy Birthday” and presented with a cake, and she covered her face briefly in embarrassment. Some 300 people followed her group in the gallery for parts of the round.

Ko, the first-round leader after a leading after a 67, drew an early tee time and had evening dinner plans to celebrate with friends. She got a new iPhone from her mother and her peers have told her she “upgraded.”

She was headed for some Korean barbecue, “go to the original roots.”

“No more singing, please,” Ko joked after her round. “Really cool to share this birthday with a lot of the people out here. Lots more time to celebrate tonight. It was a good day. It is really cool that now I’m an adult … big 18.”

And Ko found herself again talking about the fact age is no issue in golf, this time not about Inkster but someone younger – Henderson.

“She’s still 17 in a lot of ways, and that’s a good thing,” the caddie, Lee, said. “She’s not getting ahead of herself, and I think it’s very refreshing. We rolled into the parking lot and it started from there, and it was a good day.”