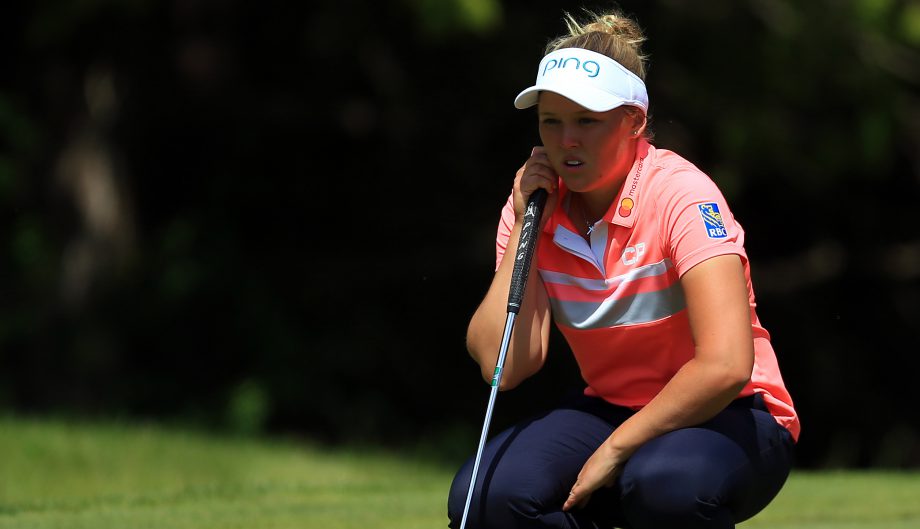 Brooke Henderson bogeyed the final two holes for a 4-under 67, leaving the 19-year-old Canadian with a two-stroke lead Friday in the Meijer LPGA Classic.

Henderson of Smiths Falls, Ont., had seven birdies – four in a row on Nos. 9-12 – and three bogeys to reach 12-under 130 and break the 36-hole record at Blythefield. She had a one-stroke lead Thursday after an opening 63.

Her approach on the par-4 17th rolled down a hill and she two-putted.

“Could have been really close to being a great shot,” Henderson said. “I practiced that shot in the practice rounds and it jumped forward on the first bounce there and I don’t think I got that today. So, unfortunately, it’s a tough hole and I just came away with bogey, which is not really what I was looking for.”

On the par-4 18th, she missed the green, left her chip well short and missed the long par putt.

“I kind of let emotions get into things and I was chasing birdie to try and get it back,” Henderson said. “Unfortunately, two bogeys to finish. Hopefully, that just gives me a little bit more motivation going into tomorrow.”

“I’m really excited to be in this position. I haven’t been in it in a little while.” @BrookeHenderson is your leader at #MeijerLPGA pic.twitter.com/MUq1VdMtrx

Maude-Aimee Leblanc (65) of Sherbrooke, Que., is 5 under while Hamilton’s Alena Sharp (72) is 3 under. Calgary’s Jennifer Ha shot an opening round 64 but faltered to an 80 on Friday to miss the cut. Augusta James of Bath, Ont., also missed the cut.

Fellow major champion Lexi Thompson, coming off a playoff loss to Ariya Jutanugarn on Sunday in Canada, followed her opening 64 with a 68 to join 2016 runner-up Carlota Ciganda (64) and Mi Jung Hur (66) at 10 under.

Thompson closed with a birdie on 18.

“I kind of peeked with about five holes to go and I think it said minus 14 was leading, and then I just saw on the last minus 12 was,” Thompson said. “But I try not to look at leaderboards, just try to focus on my own game, that’s all I can control.”

“I’ve been playing good,” the Spanish player said. “I’m just excited. It was a good week for me here last year so I have great memories. Yeah, I like the course. I like the greens. I think the crowds are always good, so I’m very excited.”

Henderson won twice last year, taking the KPMG Women’s PGA Championship for her first major, and successfully defending her title in the Cambia Portland Classic. She has a 36-hole lead for the first time since late last September in China in the Reignwood LPGA Classic.

“It’s great to see my name up there,” she said. “It’s been a little bit of a rough season so far, you know, not getting the results that I’ve been looking for. But this week seems to be a turnaround week and, hopefully, I can just finish strong the next two days.”

Moriya Jutanugarn was 9 under after a 66.

“It was great,” Moriya Jutanugarn said. “I’ve been playing solid. I rolled the ball good on the green. Everything seems to be good.”

Shanshan Feng (70) topped the group at 8 under. The Chinese player is trying to complete a Michigan sweep after winning the LPGA Volvik Championship three weeks ago in Ann Arbor.

Kim had her second 70 to make the cut on the number.