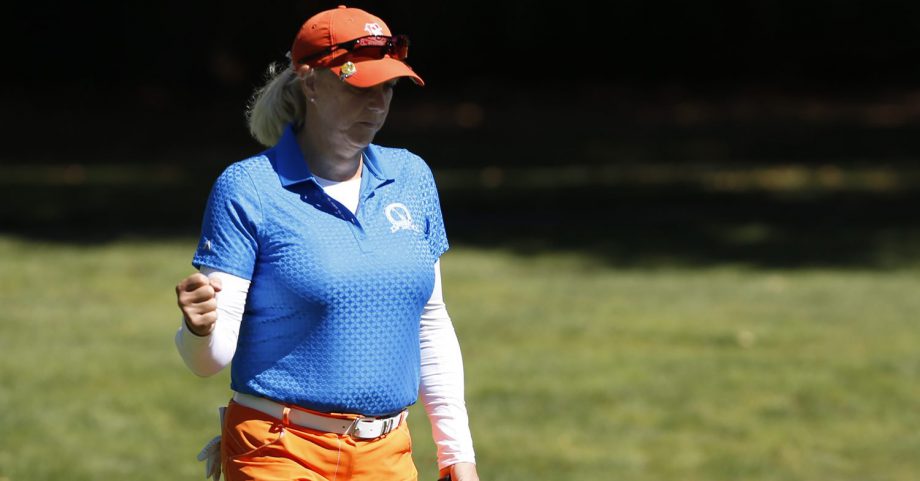 Helene Chartrand makes a birdie on the 15th green during the second round of stroke play at the 2017 U.S. Senior Women's Amateur at Waverley Country Club in Portland, Ore. on Sunday, Sept. 10, 2017. (Copyright USGA/Steven Gibbons)

PORTLAND, Ore. – Canada’s Helene Chartrand and Lara Tennant of Oregon each recorded a 36-hole total of 2-over par 146 to earn co-medalist honors in the 2017 U.S. Senior Women’s Amateur Championship at Waverley Golf Club, which is set up at 5,836 yards and a par of 72.

Tennant, who had a large gallery following her, including three of her five children and her husband, Bob, carded five bogeys and four birdies to match her Round 1 total of 1-over 73. Bob grew up in a house on Waverley’s 12th hole. Tennant’s father, George Mack Sr., an accomplished Oregon golfer who learned how to play on the course, carried her bag.

Chartrand, 61, bested her first-round score by four strokes Sunday, carding a 1-under par 71 that was highlighted by a 12-footer for birdie on the par-3 ninth hole, her final hole of the day. It was one of only two under-par rounds in the championship.

“I feel strange, happy, I don’t know where this is coming from because I haven’t been playing that great,” said Chartrand, the Canadian Senior Women’s Amateur champion in 2014 and runner-up in 2016. “I took a couple putting lessons from my coach a few weeks ago and changed my setup, and have worked hard on pace and speed and trying to trust myself.

“Usually, I’m the queen of three-putts, and I had four yesterday, but only one today,” said Chartrand who is playing in her sixth consecutive U.S. Senior Women’s Amateur and made a quarterfinal appearance in 2014, losing 1 down to champion Joan Higgins. “So, I stroked the ball really well today. I actually don’t think I can hit the ball any better than I have the last two days. I missed three greens yesterday and only two today.”

The U.S. Senior Women’s Amateur, open to female amateurs age 50 and older with a Handicap Index® not exceeding 18.4, consists of 36 holes of stroke play, with the low 64 players advancing to match play, which begins Monday. The championship, scheduled to conclude with an 18-hole final on Thursday, is one of 13 national championships conducted annually by the USGA, 10 of which are strictly for amateurs.

Other Canadians advancing through to match play are: