Canada’s Connelly climbs into fourth at Pan Am Golf competition 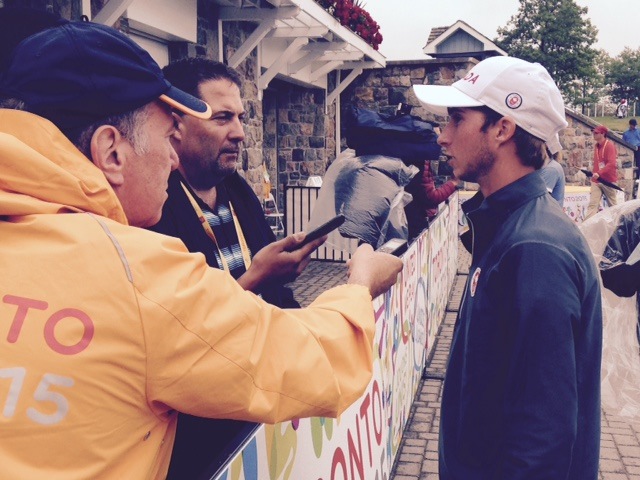 Connelly, 18, battled wet conditions including periods of steady rain throughout his round to sit tied for fourth position in the men’s individual competition at 5-under through 36 holes. Connelly heads into weekend action three shots off the lead and a single shot out of second.

Connelly’s teammate, Garrett Rank of Elmira, Ont., bounced back from an opening-round 79 to shoot even-par 72, good for 20th position overall. Rank was 3-under through 15 holes, but triple-bogeyed the 16th hole at Angus Glen to finish his second round at even-par.

Felipe Aguilar of Chile shot a second-round 67 to sit alone atop the leaderboard at 8-under while Luis Barco and American Lee McCoy fired matching 68’s to grad a share of second at 6-under through 36 holes.

Click here to the see the complete men’s individual leaderboard

In the women’s individual competition, Canadian Lorie Kane struggled Friday with a second-round 83 to fall to 22nd position at 18-over through 36 holes.

Sitting atop the women’s leaderboard is American Andrea Lee who shot a second-round, 4-under 68 to climb to 7-under for the tournament, good for a two-shot lead over Columbia’s Mariajo Uribe and Julieta Granada.

In the overall mixed team competition, Canada currently sits 11th through 36 holes. The team competition counts the top male and female score each day from each of the participating countries.

On his strong, 3-under back nine:

“Early in the back nine I started hitting some really good tee balls and really good second shots and I was gaining some confidence.”

On being part of the Pan Am Games:

“I’m not playing for a silver medal, and I don’t think anyone here is, and if you are you probably shouldn’t be here. I go into every event trying to win; it’s just another golf tournament with a couple of really neat things on the side.”

On his strong front nine and disappointing back nine including a triple-bogey on 16:

“I was three under on the front and didn’t really hit it much better than yesterday. (I) just hit it far enough offline that I was away from the trouble. I managed it around nicely on the front and just made a couple mistakes on the back.”

On his overall play on Friday:

“It was a good day aside from one hole, just try and do that tomorrow and play eighteen good holes instead of seventeen”

On her performance and lingering hip injury:

“I felt better today actually. My game is built on tempo and my timing has been off for the last few days. No excuses. My hip is a little sore but it’s nothing I haven’t dealt with before. I’m just not seeing the shape I’m trying to hit. I’ve got a two-way miss going and you can’t do that.”