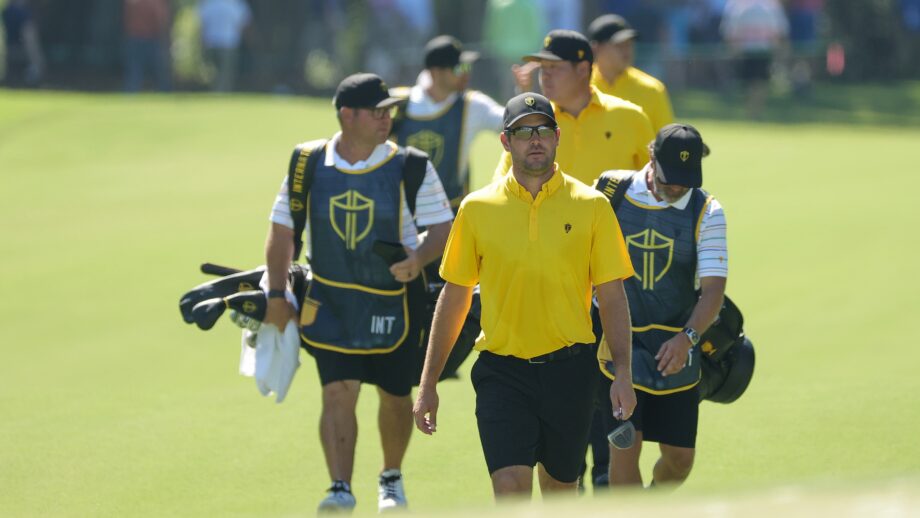 CHARLOTTE, NORTH CAROLINA - SEPTEMBER 21: Corey Conners of Canada and the International Team walks with the International team up the 18th hole during a practice round prior to the 2022 Presidents Cup at Quail Hollow Country Club on September 21, 2022 in Charlotte, North Carolina. (Photo by Stacy Revere/Getty Images)
John Chidley-Hill/ Canadian Press

CHARLOTTE, N.C. – Finding chemistry on the eclectic Presidents Cup international team can be a challenge, but Canadians Corey Conners and Taylor Pendrith are bringing their own spark to captain Trevor Immelman’s squad.

Conners and Pendrith played together on Golf Canada’s amateur teams before becoming teammates at Kent State University and were even the best man at each other’s weddings. They’ll be making their Presidents Cup debuts on Thursday as the best-on-best tournament tees off at Quail Hollow Golf Club outside Charlotte, N.C.

“To be here with him is really special, and if we have a partnership, I think we can certainly feed off of one another,” said Conners before Wednesday’s first-round draw. “If I hit a poor shot, I know he’s going to bail me out, and if he struggles on a hole, I’m going to be giving it my all to give us a chance to win the hole.

“We’re certainly great friends and have played a lot of golf together, so I’m very confident in his ability.”

Although Immelman split the Canadians up in the first round’s draw on Wednesday afternoon, it’s likely they will have a chance to play together at the PGA Tour event that sees 12 Americans face 12 players from around the world, excluding Europe.

Conners, from Listowel, Ont., will partner with South Korea’s Sungjae Im against Jordan Spieth and Justin Thomas in the second match of the first round. Pendrith, from Richmond Hill, Ont., will team with Chile’s Mito Pereira against Tony Finau and Max Homa in the day’s fifth match.

Pendrith said he’s enjoying sharing the honour of playing on the international team with one of his best friends.

“To be with him is really cool and comforting,” said Pendrith. “He’s probably the person I’ve played my most rounds of golf with, ever.”

Conners was an automatic selection after finishing the PGA Tour season fourth on the international team standings. He rose up from sixth after Australia’s Cam Smith and Chile’s Joaquin Niemann jumped to the Saudi-backed LIV Tour on Aug. 30, disqualifying themselves from the PGA Tour-backed Presidents Cup.

Pendrith was officially selected by Immelman on Sept. 6 after he missed four months of the PGA Tour season with a fractured rib.

The two friends have very different play styles, with Pendrith renowned for his long drives and Conners considered a surgeon with his irons.

On paper the Presidents Cup result seems like it could be a foregone conclusion.

The American team’s average world ranking is 11.58, while Japan’s Hideki Matsuyama – currently No. 17 on the world rankings _ is the highest-rated member of an international team depleted by the defections to the LIV Tour. The betting line reflects that, with oddsmakers putting the Americans as -700 favourites.

History is also not on the internationals side. The United States has won the biennial event 13 times, with the internationals winning in 1998 at Royal Melbourne Golf Club in Australia and the two sides tying in 2003 at Fancourt Hotel and Country Club in George, South Africa.

Australia’s Adam Scott has played in nine of those losses and assistant captain Geoff Ogilvy, also from Australia, said those losses have served as a motivation for his countryman.

However, the players on the international squad have combined for 33 victories on the PGA Tour, including Conners’ win at the 2019 Valero Texas Open. Assistant captain Mike Weir of Brights Grove, Ont., said there’s a lot of positivity in the international locker room.

“The mood has been great. The guys are very enthusiastic. We feel they’re up for the challenge,” said Weir. “Their games look great. There’s a great buzz in our team.”

The next Presidents Cup will be in 2024 at Royal Montreal Golf Club, which hosted the event in 2007.