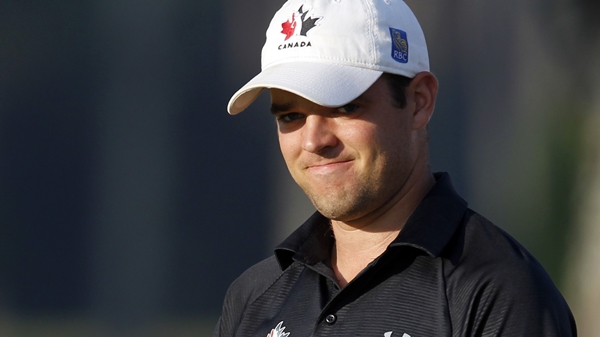 Corey Conners is getting ready for the biggest golf tournament of his life. But, the Canadian is trying to treat it like any other.

As a youngster, Conners said he got a VHS tape of the 1997 Masters when Tiger Woods won by 12 strokes. He watched that video “one or two hundred times.” He also remembered watching on television as Mike Weir sank the final putt to win his own green jacket in 2003.

Now, Conners will be playing in the tournament he’s only seen on a screen.

The 23-year-old from Listowel, Ont., will be in the field for next week’s Masters Tournament in Augusta, Ga., thanks to a runner-up finish at the U.S. Amateur Championship in 2014. The two finalists are traditionally invited to participate in the Masters each year.

He’ll become the 13th Canadian amateur to play in the tournament, joining names like Sandy Somerville – who played in the first Masters in 1934 – and Moe Norman. He’ll be the 29th Canadian ever.

And, unless Graham DeLaet wins on the PGA Tour this week at the Shell Houston Open, Conners and Weir will be the lone Canadian representatives in the field this year.

Conners hasn’t allowed the big stage to get to him yet. Augusta, although historical, is “pretty cool.” He admits he is “really looking forward to the experience,” but he just wants to play golf.

“I’m really excited for next week,” he said Tuesday. “I’m really looking forward to the experience.”

No amateur has ever won the Masters, but American Ken Venturi came close. He finished one shot back of the eventual champion Jack Burke Jr. in 1956.

Conners doesn’t shy away from saying how Augusta National fits his game.

“Overall the course is beautiful, and it sets up well for my game,” he explained. “It’s a really great course and I think I can do really well.”

He’s not alone in thinking this.

Besides a group of fans from his hometown – Conners says his father will likely caddie for him in the par-3 competition next Wednesday, before the tournament begins – Golf Canada’s men’s national team head coach Derek Ingram will also be in Augusta.

Conners has been part of Golf Canada’s program off-and-on since 2010, and Ingram has watched him grow as both a player and a young man.

“If he plays his game, I really think he can (finish in the) top 20,” Ingram stated. “The course at Augusta suits his game really well.”

Conners has played a handful of practice rounds at Augusta National, including one where Ingram was present. He says they’ve tried to work on hitting shots to the best spot possible on Augusta’s notorious greens.

“He’s trying to treat it like golf. He knows golf really well and he knows tournament golf really well,” said Ingram. “Obviously the Masters is the most iconic and biggest professional golf event in the world, and there will be some challenges there. But we’ve talked about dealing with them.”

Conners is working to arrange a practice round with Weir. He’ll definitely play one with Europeans Lee Westwood and Darren Clarke, who are both managed by the same company as Conners – International Sports Management (ISM).

The team at ISM arranged for Conners to get a spot in the PGA Tour’s Puerto Rico Open in March. He missed the cut, but said that experience was invaluable.

“It was a huge in helping me prepare. I learned a lot playing there and it was great to be out there with a bunch of professionals,” he explained. “I learned a lot that will make me feel comfortable during the Masters.”

Conners has picked the brains of a few fellow amateurs who have played in the Masters in years past, players he crossed paths with while playing for Kent State University.

Conners was a two time All-American there, and was named Kent State’s outstanding male athlete in his graduating year.

The award is given to, “the male member of the senior class who has demonstrated the most exceptional combined qualities of leadership, positive image, athletic ability and academic performance.” According to his college coach, Herb Page, this sums up Conners perfectly.

“I’m really proud of what he accomplished and how he did it,” said Page, a Canadian who is in the Ontario Golf Hall of Fame. “A lot of young men hit a little wall or they don’t keep pushing ahead. But, he kept advancing and getting better. And now he’s at the Masters.”

Conners drove down Magnolia Lane – the entrance-way to Augusta’s hallowed grounds – for the first time a few weeks ago.

“It didn’t feel real,” he admitted.

But, it is. And it all starts next week.

Click here to listen in to a media teleconference with Corey Conners and Canadian golf journalists recorded March 21, 2015.