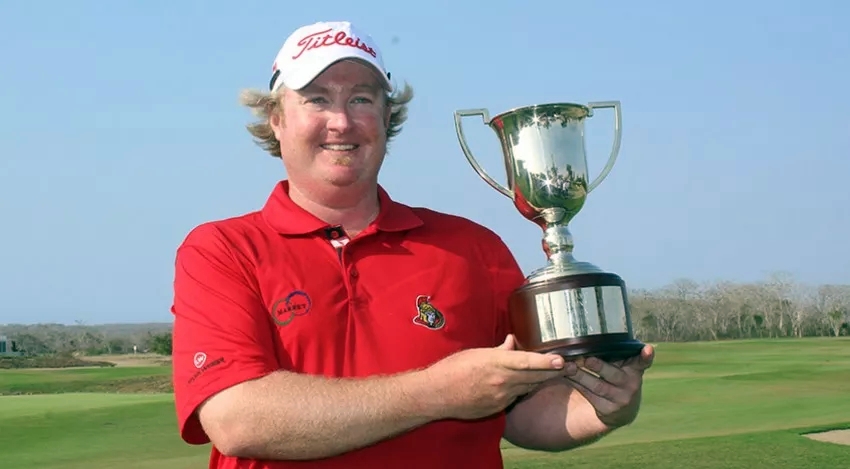 CARTAGENA, Colombia – Canada’s Brad Fritsch won the Servientrega Championship on Sunday for his first Web.com Tour title, beating Ollie Schniederjans with a par on the first hole of a playoff.

The 38-year-old from the Ottawa area  shot a 1-under 71 to match Schniederjans at 11-under 277 at TPC Cartagena at Karibana. Fritsch, who earned full-time status on the Web.com Tour this season through qualifying school, earned US$126,000.

Schniederjans had a 69, then made a triple bogey on the par-5 18th in the playoff.

Tag Ridings was third at 9 under after a 69.

“This is huge,” said Fritsch, who collected a check for $126,000 at the trophy ceremony. “My whole golfing life I haven’t won a lot. This is easily the biggest win against the best field that I’ve ever faced.”

“I mean, obviously it gives me a nice jump on getting my card for next year,” continued Fritsch, who jumped to No. 5 on the Tour money list. “To do something I’ve never really done before and to execute under pressure on 18, I love it. I want that feeling again.”

Fritsch hit what he called the greatest shot in his life on the first extra hole. With 220 yards from the right side of the fairway, the 38-year-old from Edmonton, Alberta opted for a long iron and striped it to 20 feet under the hole. From there, Fritsch only needed to make par to claim his first trophy as Schniederjans pulled his tee ball into the pond left of the fairway.

“I wasn’t exactly sure what was going on, but I hit a great shot,” said Fritsch, who hit his second before Schniederjans took a drop. “This time I hit the 4-iron, figuring that if I could get that on and two putt, he would have to get it up and down.”

Schniederjans took a drop; mishit is third from the left rough and dunked his third into the hazard. The 22-year-old former No. 1 in the World Amateur Golf Rankings took another penalty stroke and sailed the green with his fifth shot.

“It was kind of awkward,” said Fritsch, who received a standing ovation as he approached the green. “I had people congratulating me walking to the green and my caddy kind of gave me a high five.”

Fritsch tried to compose himself, but he still three putted for par. After the putt fell, the 16-year-old pro was overcome with emotion as his good friend and fellow Tour player Tag Ridings showered him with beer to celebrate.

The lead changed hands quite a few times throughout the final round. Schniederjans tied Fritsch at 11-under with a birdie on the 16th hole, but gave it right back with a bogey at 17. The Dallas, Texas native closed with a birdie at the par-5 18th to post 11-under to take the clubhouse lead. At that very moment, Fritsch bogeyed the 17th hole to drop one back of Schniederjans heading into the home hole.

“I was just trying to grind my way in,” said Fritsch. “I’m a scoreboard watcher and I’ll watch it. I knew he (Schniederjans) birdied 18.”

Fritsch responded on the final hole hitting a hybrid from 227 yards to just off the back of the green. He tried to chip it in, spun it two feet short of the hole and knocked in the birdie try to force overtime. The rest was history.