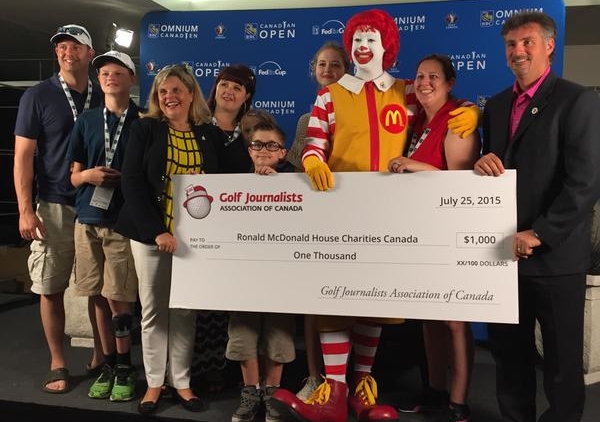 Grant Fraser, President of GJAC, along with Cathy Loblaw, President and CEO of RMHCC, were in attendance, along with three families who have enjoyed the support of the Ronald McDonald House.

Ronald McDonald himself was there as well.

“On behalf of the members of the Golf Journalists Association of Canada (GJAC), I am pleased to make this donation to Ronald McDonald House Charities Canada (RMHCC),” said GJAC president Grant Fraser. “On Monday of RBC Canadian Open week we held our annual GJAC Awards Day and used this opportunity to raise funds for this wonderful charity which supports children and their families during difficult times. Our members are pleased to have made this connection to RMHCC and know this donation will be put to great use.”

RMHCC, founded in 1982, has been the official charity partner of the RBC Canadian Open for the last three years.

“Golf holds a special place for all of us at Ronald McDonald House. Each of our 14 houses across the country hosts their own golf tournament to raise funds for families who are staying with us while their child is being treated at a nearby hospital. And, the RBC Canadian Open is really the pinnacle of that golf expression,” said Cathy Loblaw, the Executive Director of RMHCC. “What the golf journalists have done today to really feel that support in a personal and meaningful way. Every donation makes such a powerful difference for us.”

The 2016 GJAC Writing Awards & Golf Day will be hosted the Mississaugua Golf and Country Club.