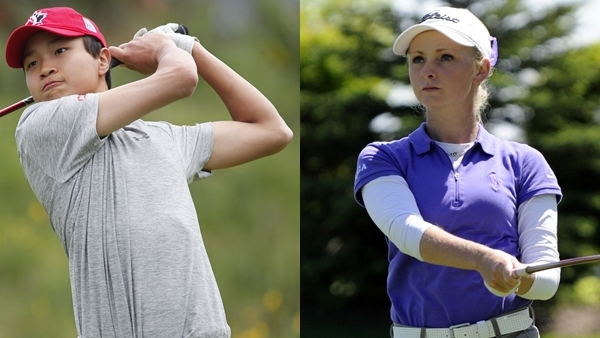 Oakville, Ont. (Golf Canada) – Golf Canada is proud to announce the names of the athletes set to represent Canada in the Youth Olympic Games, taking place in Nanjing, China from August 16 – 28, 2014.

Gil and Szeryk will be accompanied to Nanjing by Robert Ratcliffe, lead coach with Team Canada’s Development Squad. Ratcliffe has international playing and coaching experience and has worked with Golf Canada’s National Team program since 2007.

“It is very exciting to announce Tony Gil and Maddie Szeryk as the first Canadians ever selected to represent Canadian golf at the Youth Olympic Games,” said Jeff Thompson, Golf Canada’s Chief Sport Officer. “Both of these talented competitors are eager to succeed in representing Canada on the international stage as we prepare for golf’s inclusion in major international multi-sport events such as the Youth Olympics, 2015 Pan Am Games and the 2016 Olympic Games.”

Tony Gil
2014 marks Gil’s first year representing Team Canada as a member of Golf Canada’s Development Squad. Prior to joining the National Team, Gil was a member of the Golf Association of Ontario’s (GAO) Under-17 Provincial Squad He finished tied for 12th at the 2013 Ontario Amateur Championship and 5th at the 2013 Ontario Junior Boys Championship. Since joining Team Canada, Gil continues to post strong results, including wins at the CJGA International Junior Challenge and the GAO Investors Group Junior Spring Classic. He also recorded a 6th place finish at the prestigious South American Amateur and is coming off of a memorable experience at the Toyota World Junior where he finished tied for 37th.

Maddie Szeryk
Szeryk, a GAO public player, made her mark in 2013 with three junior championship victories. Most notably, Szeryk won the 2013 Canadian Junior Girls Championship by an impressive 14 strokes. She also claimed victory at the 2013 CN Future Links Ontario Championship and the CJGA/AJGA Junior Championship. Szeryk, a dual-citizen with family ties to Ontario and Texas, recently secured her Canadian citizenship. Her 2014 results include appearances in both the USGA Junior Girls Championship and the North Texas LPGA Shootout. In addition, she won the 2014 AJGA Thunderbird International Junior in a playoff and finished third at the AJGA Under Armour/Hunter Mahan Championship.