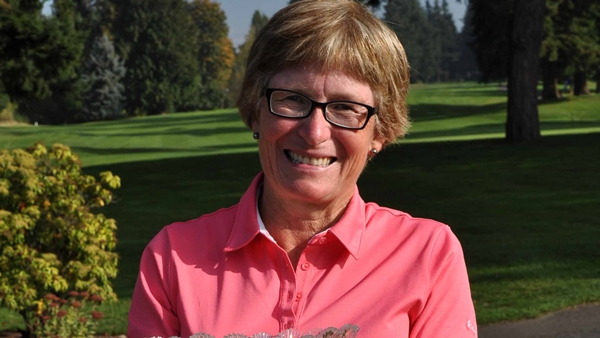 Grant’s final round 2-over par 73 was the championship’s low round and vaulted her into first place for a two-shot victory over second-place finisher Gretchen Klein of Hoquiam, Wash. Grant had shot an 82 in the first round.

“Basically, what did it for me was my putting, my short game,” Hubbard said. “I made some good up-and-downs. I also drove the ball pretty steady.” Hubbard has never won a championship of this calibre before. “I’ve played in several events, the Alberta Seniors, the Canadian Seniors, so I’m fortunate to have that experience. It’s been a good year.”

Hubbard’s win was highlighted by a hole-in-one on the par-3 12th hole in yesterday’s opening round of the championship. Her husband had passed away just five weeks ago, and she used his 3-wood on the par-3. The hole is uphill so nobody saw the ball go in the hole, and after she hit her tee shot she stopped to use the restroom before heading to the green. When she got to the green, her playing partners said they couldn’t find her ball, so she started looking behind the green, but then they told her to look in the hole for her ball.

“They had already seen the ball was in the hole, and were kidding me,” said Hubbard. “When I saw the ball in the hole I told myself that I did this for my husband.”

PNGAHall of Famer Ann Swanson of Bellevue, Wash. finished in second place, one shot behind Hubbard.

The Pacific Northwest Senior Women’s and Super Senior Women’s Amateur are two of 16 major, regional, amateur championships for men, women, juniors, and seniors conducted annually throughout the Northwest by the PNGA.