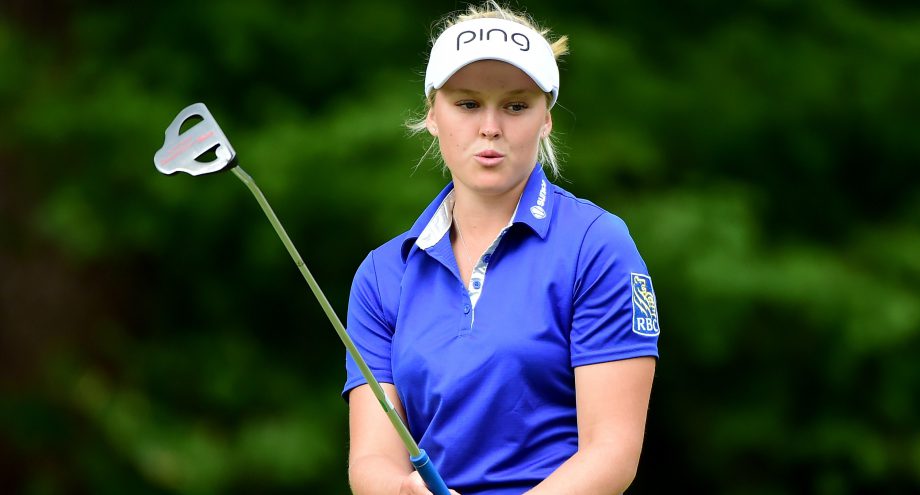 TORONTO – Brooke Henderson had two dreams come true this year: she became a member of the LPGA Tour and won her first tournament at that level.

She’s setting her sights even higher in 2016.

Henderson hopes to continue her ascent on the top women’s professional golf circuit and also lead Canada to the podium when the sport makes its return to the Olympic program next summer in Rio.

She got a chance to learn more about the Olympic experience at this week’s Canadian Olympic Committee symposium at a downtown Toronto hotel. Watching promotional videos of fellow Canadians winning medals and hearing the national anthem has her counting down the days until the 2016 Games.

“Every time I watch those videos, I get goose bumps. My blood runs crazy,” Henderson said Thursday. “It’s an amazing opportunity that I have just to play in the Olympics and to play on the LPGA Tour.

“They’re both dreams that I’ve had since I was young and now this year is the first year that I can achieve both of those.”

Henderson, a former top-ranked amateur, showed this past season that she was the real deal. She finished third at the Swinging Skirts LPGA stop last April before picking up fifth-place ties at the Women’s PGA Championship and the U.S. Women’s Open.

Her statement performance came in August at the Cambia Portland Classic, when she blew away the field with a whopping eight-stroke victory.

Henderson was about three weeks shy of her 18th birthday at the time. She was granted immediate LPGA Tour membership by commissioner Mike Whan after the win.

The teenager from Smiths Falls, Ont., has since climbed to No. 18 on the Tour’s ranking list. Henderson is planning a full schedule in 2016 and plans to treat the Games like the sixth major of the season.

“The Olympics is a dream that I had as a little girl,” she said. “I didn’t know what sport or what I was going to do or how I was going to get there. But I wanted to be in the Olympics and I wanted to share the same passion as all these other athletes that I watched on TV in the Winter and Summer Games.

Sixty golfers will compete in the four-round women’s stroke play competition at the Aug. 5-21 Games. Golf was last played at the Olympics in 1904.

“I’ve won on the LPGA Tour, I’ve competed against the best in the world, I know (Olympic success) is possible,” Henderson said. “Hopefully if I can move my ranking up a little bit more, I’ll be seen as a contender in Rio.”

Official player nominations aren’t expected to be made until July, but Henderson is a virtual lock for the Canadian team. She’s looking forward to the pressure and the high expectations.

“It’s fun to have because you’re expected to do great things,” she said. “I’m really excited to go and represent my country and be the best that I can be.”