Canada’s Hughes tied for the lead at Travelers 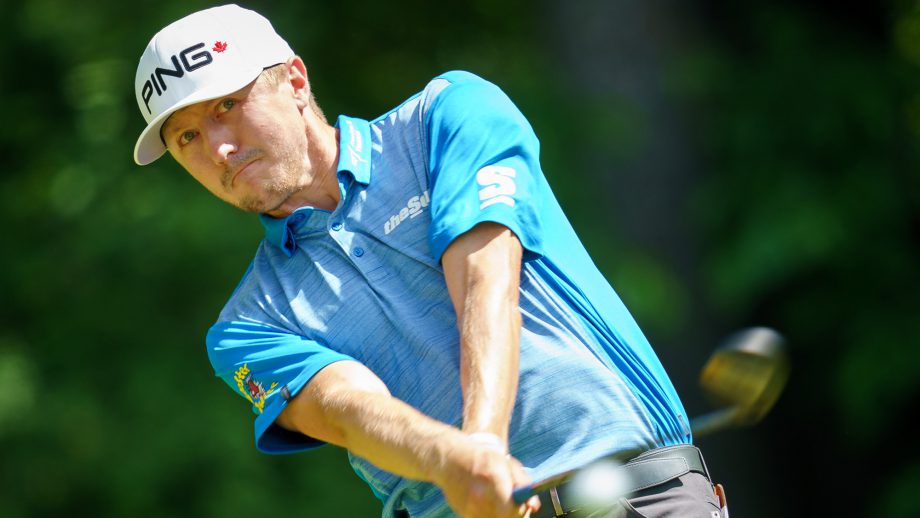 CROMWELL, Conn. – A week of major championship pressure at the U.S. Open and a cross-country trip made for a lot of tired players at the Travelers Championship. Greens made soft by rain on a relatively easy course helped perk up many of them Thursday.

Six players shot a 6-under 64 to tie for lead, with defending champion Bubba Watson (69) , two-time winner Phil Mickelson (67) and 79 others within five shots going into the second round.

Brooks Koepka, coming off a runner-up finish at Pebble Beach, had a 71 and said he was among those fighting exhaustion.

“When you think about all the travel we’ve done and how much last week takes out of you,” he said. “When you are in contention in a major, it’s going to drain you.”

The leaders included Zack Sucher and Kyoung-Hoon Lee, who each shot their lowest rounds on the PGA Tour. Sucher made a 9-foot birdie putt on No. 18 in the last group of the day to join a group that also included MacKenzie Hughes of Dundas, Ont. who sank an 18-foot birdie putt on his final hole.

Abraham Ancer shot a 30 on his back nine. Bronson Burgoon birdied four of his first six holes, and Ryan Armour, who has missed the cuts in four of his last five starts, tied his lowest round of the season.

“I gave myself a lot of opportunities, which I hadn’t been doing lately, Armour said. ”I hadn’t been hitting a lot of greens, wasn’t shaping the golf ball the way I want to shape it. We worked really hard the last few days.“

Englishman Paul Casey, who gave up a four-shot lead in the final round a year ago, missed a 17-foot par putt on the 18th and finished in a group of six at 65.

Memorial champion Patrick Cantlay was part of a group of 12 at 66.

Cantlay started on the back nine and was tied for the lead when his tee shot landed in water on the par-3 eighth hole, leading to a double bogey. But that did not affect the confidence of the former UCLA star, who was just 19 years old when he shot a 60 on this course during the second round in 2011, setting a PGA Tour record for amateurs.

“I definitely feel comfortable around here,” he said. “It’s one of the only golf courses I think I get on the first tee at the beginning of the day and think I can birdie every hole.”

Defending champion Bubba Watson opened with a 69 in his bid for his fourth Travelers title. That would put him in the company of Billy Casper, the only golfer to win four times at Connecticut’s PGA Tour stop.

Watson, who came from six-shots back on the final day to win a year ago, seemed relaxed as he participated in an afternoon whiffle ball game with a group of players’ children outside the new clubhouse.

“Around this golf course, you’ve got to just know there’s going to be birdies out there,” he said. “Today was a little more difficult because a little bit of mist here and there just made the ball react different on the greens with some shots.”

Mickelson, who won back-to-back tournaments here in 2001 and 2001 was playing in Connecticut for the first time since 2003. On Wednesday, the 49-year-old said he probably would never win a U.S. Open. But he’s in contention again in Connecticut.

“I didn’t hurt myself any,” Mickelson said. “I made a few mistakes out there that I have to clean up tomorrow. I feel like the round should have been three or four lower, and if I can do that tomorrow and shoot three or four lower, I’ll be right in it for the weekend.”

He was playing with 2017 champion Jordan Spieth, who put a shot onto the railroad tracks and another in the water on his way to an eight on the par-5 13th. He finished with a 73.

Chip McDaniel shot a 69 and could also be excused if he was a bit tired. The 23-year-old arrived in Connecticut early Monday morning after taking a red-eye flight from his first U.S Open. He then played in a qualifier that afternoon, making the field after three playoff holes.

“Just because of my situation, one good week out here could change my life,” McDaniel said. “I have to try to get a start in every PGA event.”

Viktor Hovland shot a 67 in his professional debut. The Oklahoma State junior, who was the low amateur at the U.S. Open, received one of four sponsor exemptions into the tournament.

“I try not to think too much about it, but obviously there is a difference,” Hovland said. “I’m just trying to make birdies and avoid bogeys. I think instead of thinking about money, I’m thinking more about I want to have some kind of status for next year.”