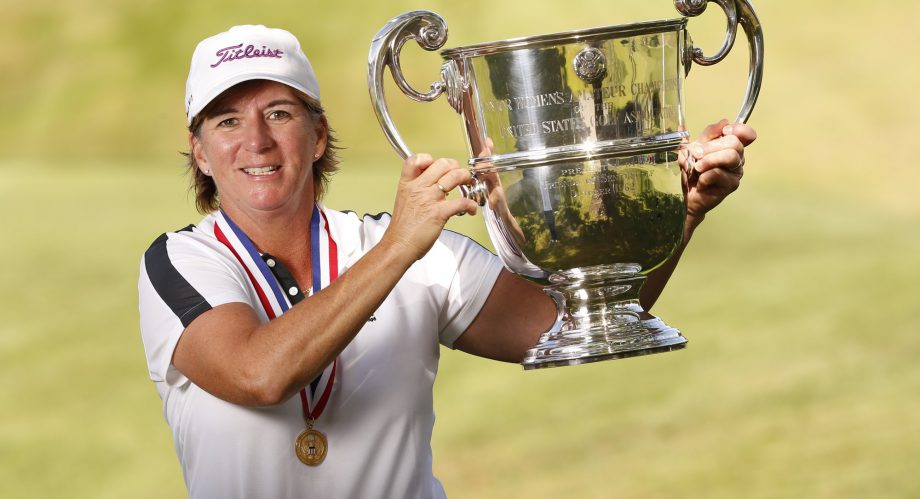 Kyrinis, 53, was the U.S. Senior Women’s Amateur runner-up three years ago at Hollywood Golf Club in Deal, N.J., losing 1 down to Joan Higgins.

“It’s very special, very surreal. I don’t really believe that I’ve won yet,” said Kyrinis. “You know, it was a tough match to lose [three years ago]. You take it to 18, and like I said, I was crying like a baby, and it’s not because I was mad I lost, it’s just because you’re so pent up with all these emotions for the whole week.”

It was another emotional week for Kyrinis, who like three years ago, was greeted before the final match by her brother, Dan Allan, who showed up without prior notice and slept the previous night in his car. The week was also a celebration of Canadian golf, as several of the nine Canadian players who competed in the championship stuck around to watch their countrywomen compete in the final. Of those nine Canadian players, four advanced to the quarterfinals.

“All the girls I think that you saw, we all played very well,” said Kyrinis. “We really kind of got far into the tournament, in our matches, and it was good because, you know, I’ve been looking at those leader boards, which were fabulous, and it really would spur you on. You’d see your friends doing well, and you’re like, OK, let’s go. You don’t want to be left in the back of the bus, right, so it was fun.”

One of those players following in the gallery was 2005 U.S. Women’s Mid-Amateur champion Mary Ann Hayward, the most recent USGA champion from Canada and a quarterfinalist this week. It seems a fitting ending for Kyrinis, who lists four-time USGA champion and three-time U.S. Senior Women’s Amateur champion Marlene Stewart Streit as a mother figure and golf idol.

Three years after coming up just short, Kyrinis never trailed in this championship match. With her husband, Manny, on her bag, she won the first hole with a par.

After halving the next three holes, Samuel, a recently retired teacher from the Toronto area, played superb scrambling golf on holes 5 and 6. On the 451-yard, par-5 fifth, Samuel hit her second shot way left, behind a tree-lined area. With Kyrinis on in three, Samuel punched through the tree line, barely holding the back collar of the green. After Kyrinis rolled her birdie attempt 9 feet by the hole, Samuel two-putted from the collar and squared the match when Kyrinis three-putted.

On the ensuing 119-yard, par-3 ninth, Samuel, 56, hit into the right greenside bunker, plugged in the front lip. Kyrinis hit a beautiful shot to the front-right flag location, but her ball rolled off the right edge of the green, down a small valley. Forced to take an extremely awkward stance, Samuel popped the ball straight into the air and rolled it to 3 feet. Kyrinis then putted 8 feet past the hole, but earned a crucial half with a tricky par save to keep the match all square.

“You have to have a bit of luck with that shot, and so I was just trying to find a stance, and I was hoping that I could just pop it out,” said Samuel of her bunker shot. “It actually went perfectly because it went down, popped up and down. Got to have a little bit of luck. I knew if I could get it up over the lip, it will hit it hard enough that it would get out of the bunker because that’s pretty thick stuff in my stance.”

Kyrinis, a registered nurse who lives 20 minutes away from Samuel outside Toronto, immediately took advantage of her par save on 6 to win 7 with a birdie. Both players hit similar approach shots to about 10 feet. Going first, Samuel’s birdie attempt lipped out, and Kyrinis got a read on the line and converted hers to retake the lead.

After matching each other stroke for stroke on the next four holes, Kyrinis began her winning march on the par-4 12th hole. It all began with a fortuitous bounce for Kyrinis, as her tee shot hit the back facing of the right fairway bunker, but careened to the right rough instead of dropping in the bunker. Both players hit their second shots on the green, about 20 feet away. After Samuel posted a conceded par, Kyrinis rolled in her 20-footer to go 2 up.

“It was pretty flat, and as long as you keep the pace up on these greens, they’re not going to go one way or another way,” said Kyrinis. “It was probably a little more pace than I thought, or wanted, but happy to see it go down to the bottom of the hole for sure.”

On the par-5 13th, Samuel tried to play a delicate pitch over a bunker that protected the front-center flag location. Her shot was just a little short, however, and instead of a good birdie attempt, she was again playing out of a bunker. With Samuel unable to get up and down, Kyrinis made a routine par to go 3 up.

With Kyrinis still 3 up, the match ended on the 15th hole when Samuel again found bunker trouble. Samuel crushed her tee shot with a driver, but maybe hit it too well. She found herself in the front of a middle fairway bunker. Needing to be aggressive, Samuel took a full swing, trying to get on the green, but her shot hit the lip of the bunker and ricocheted backward. Once Kyrinis hit her second shot close, Samuel conceded the match before any putts were attempted.

Despite the defeat, Samuel was in good spirits and happy for her close friend.

“It’s easy, because I always root for her at every tournament because that’s the type of person she is, bar none,” said Samuel of Kyrinis. “We’re just such great friends. That was the bonus of playing today is whoever won, we’d be happy for each other.”

The U.S. Senior Women’s Amateur, open to female amateurs age 50 and older with a Handicap Index® not exceeding 18.4, consists of two 18-hole rounds of stroke play and six rounds of match play. It is one of 13 national championships conducted annually by the USGA, 10 of which are strictly for amateurs.